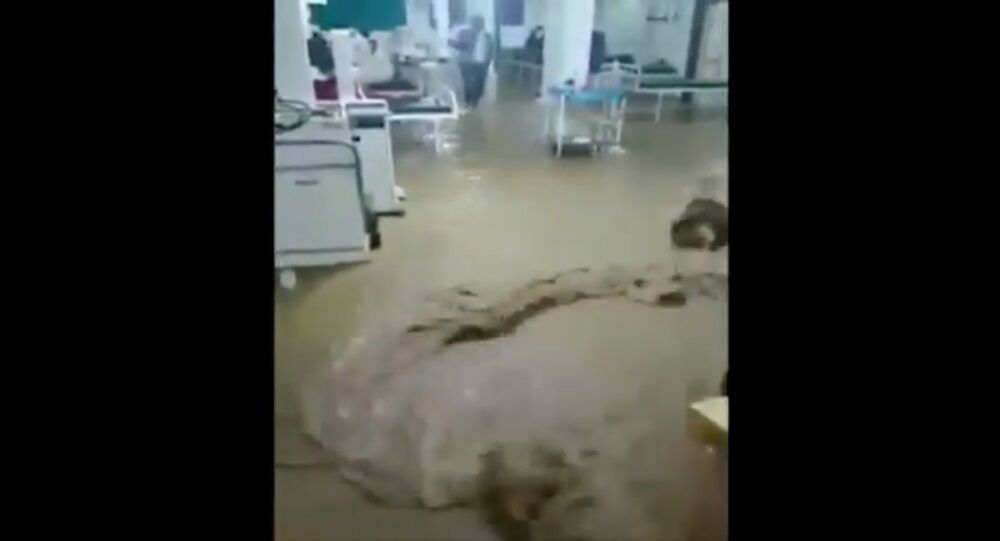 New Delhi (Sputnik): The Indian state of Maharashtra has remained the worst-hit state since the beginning of the pandemic, with 107,958 out of 332,424 infections registered in the country. The state which usually battles with heavy monsoon rain and its repercussions is bracing for early monsoon showers.

Heavy rains flooded the ground floor, including the emergency ward of a hospital in the Indian state of Maharashtra where COVID-19 infected patients were admitted for the treatment.

The staff and patients, in Jalgaon district, had to be evacuated from the flooded rooms in the middle of the night as the water level rose to knee-level ; the equipment and machinery were left behind. In the videos, the hospital staff can be seen moving the patients on a stretcher through ankle-deep waters in the hospital.

Is this really True?! Unbelievable 🙄😩
The below video is Rainwater entering the emergency ward of Dr Ulhas Patil Medical College and Hospital in Jalgaon, #Maharashtra
Such pathetic medical care system!! #MondayBlues pic.twitter.com/yX8wc3pq45

#WATCH | #Maharashtra: Rainwater entered the emergency ward of Dr Ulhas Patil Medical College and Hospital in Jalgaon yesterday. According to hospital authorities, 7-8 patients who were admitted in the ward were safely evacuated. pic.twitter.com/Oc26pJJ3kw

Adding to the woes of the pandemic's worst-hit Indian state, the monsoon is expected to hit other parts of Maharashtra by today, according to the India Meterological Department (IMD).

"Monsoon has arrived in most parts of Maharashtra. (Today) rainfall was reported in Harnai (in Ratnagiri) in Konkan, Ahmednagar in central Maharashtra, Aurangabad in Marathwada and Gondia in Vidarbha. In the next 24 hours, the rest of Maharashtra is expected to be covered," the official said.