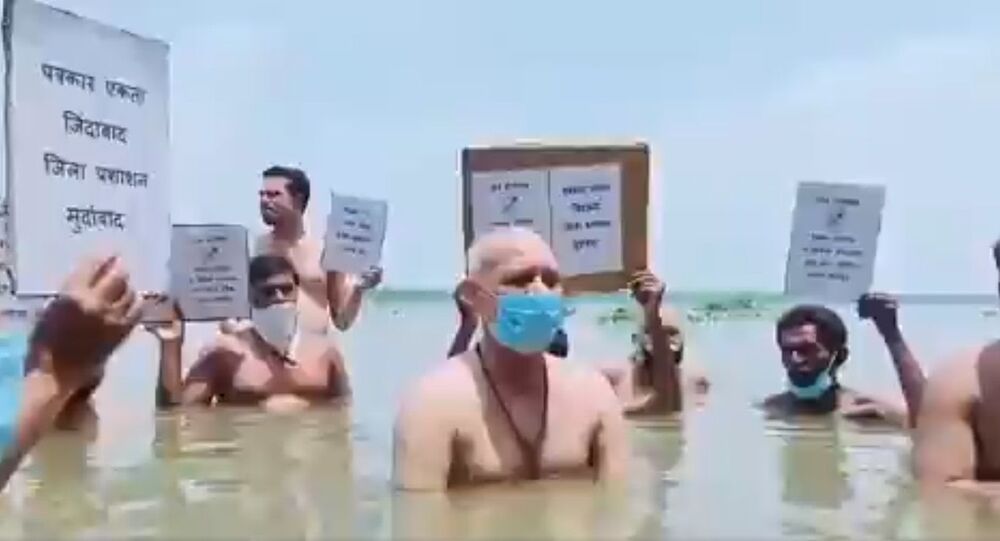 New Delhi (Sputnik): The northern Indian state of Uttar Pradesh has reportedly seen several incidents of reports by journalists resulting in police complaints against them from the local administration. One such infamous instance occurred in September 2019 over a report about a mid-day meal being served in government schools.

A group of journalists are staging a unique protest against the state government by standing in neck-deep water in the Ganges River River that passes through the Fatehpur district of Uttar Pradesh. Police have filed complaints against two local journalists — Ajay Bhadauria and Vivek Mishra — allegedly for their video reports.

Bhadauria was booked on charges of “circulating false news” on 13 May for a tweet where he pointed out that a community kitchen in Fatehpur’s Vijaypur had closed down.

Journalists in UP's Fatehpur district held "Jal Satyagraha" to protest FIR registered against scribe Ajay Bhadauria for his report on community kitchen. Journalists claim they had written to Governor about alleged harassment of local scribes but yielded no response. pic.twitter.com/oSjyNOFdio

​The other journalist Vivek Mishra has claimed that "on 25 December, I reported on corruption in cow shelters in the area and an FIR (police complaint) was filed against me on the same. I had made the story with video proof, it was not our opinion, but the district official filed a police complaint against us".

​"An investigation committee should be formed. There are a lot of problems in the district and we are protesting against the same and district officials involved in corruption activities are harassing journalists for reporting", he says in the video.

This is not the first instance of a report having resulted in a police complaint against a journalist in Uttar Pradesh. In September 2019, a case was filed in Mirzapur by the state government against a reporter who filmed students at a government school eating rotis (wheat bread) with salt as their mid-day meal.

In the video, children were seen sitting on the floor, eating rotis with salt as part of the government’s mid-day meal programme, which provides food to schoolchildren.