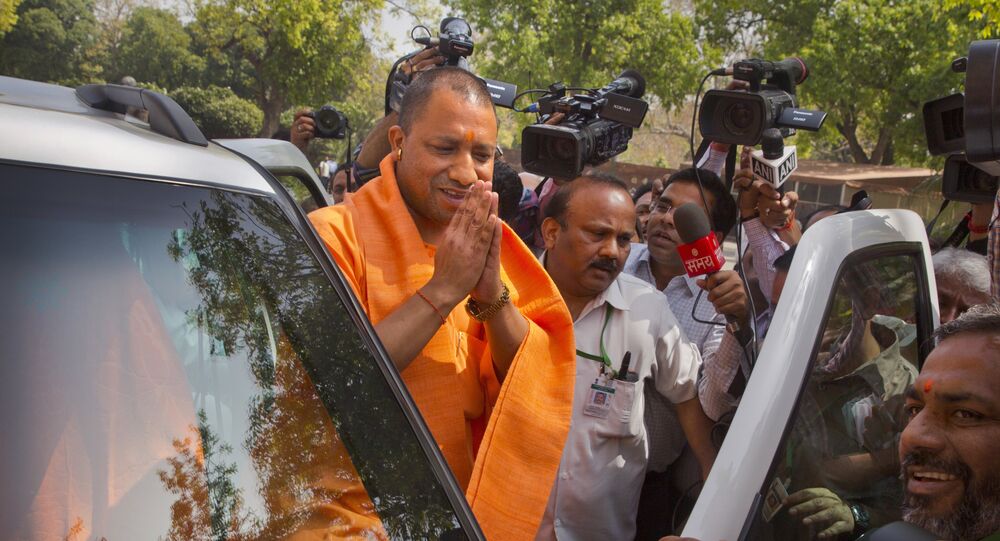 New Delhi (Sputnik): The arrest of a Delhi-based journalist has divided public opinion, and the Editors Guild of India swiftly called for his release. However, some BJP supporters have hailed the arrest, calling the journalist “Hinduphobic”.

The arrest of a journalist in India for sharing an unverified video of Uttar Pradesh Chief Minister has sparked a row, with some defending the move and others branding it an attack on freedom of speech and expression.

He tweeted a video about a woman claiming that she was in a relationship with Adityanath and she wished to marry him. He also posted a comment taunting the BJP leader over the matter.

A police complaint against the tweet was registered in Lucknow. He was subsequently arrested on Saturday afternoon by Uttar Pradesh Police while in his home in Delhi.

The arrest evoked furore amongst media and activist circles, with many demanding his immediate release.

The arrest.of @PJkanojia appears illegal because:
1. Section 500 IPC is on defamation, it's a private complainant, you can only be arrested if a court has convicted you of the offence.
2. Section 66 concerns causing damage to a computer system and doesn't apply here https://t.co/BSZXO2oeKw

Today it’s Prashant, tomorrow it can be you #ReleasePrashantKanojia ‘Protest March’ from Press Club of India to Parliament Date: Monday, June 10, Time: 1 pm

​Why journalists’ arrest for sharing Adityanath video is a case of brazen high-handedness..

The arrest of #PrashantKanojia is a massive abuse of power and force by the UP government. CM Yogi Adityanath has yet again displayed BJP’s complete disdain for free speech and dissent, which are the bedrocks of any democracy. #FreePrashantNow https://t.co/sRWQbrcAZ3

However, some BJP supporters shot back at Kanojia, singling out one of his old tweets from 2016 in which he seemed to call for the killing of Hindu saints.

Kill saints and save humanity #SaveSaintsSaveHinduism

Some social media users branded him a "Hinduphobic liar" who has been spreading fake news, and hailed the arrest by Uttar Pradesh police.

2. Hinduism is the worst religion on Earth

3. Dalits who claims to be Hindu are Animals

4. Hinduism a filth on Humanity

5. Hinduism is a fake religion with fake god hope it gets destroyed.

Note: Prashant is Journalist of The Wire

There is filth in the mind of Prashant Kanojia https://t.co/eH9EhZPBlp

Meanwhile, Jagisha Arora, the wife of Kanojia, has moved a petition in the apex court of India calling for his release.

The Editors Guild of India, a body of Indian journalists, also condemned the arrest of Kanojia, calling it a "Brazen misuse of power".

In a press statement issued on Sunday, the Guild said "Whatever the accuracy of the woman's claims, to register a case of criminal defamation against the journalists for sharing it on the social media and airing it on a television channel is a brazen misuse of law. To give the police powers to arrest, provisions of Section 66 of the IT Act have also been added."

India to Avoid US Sanctions Over S-400 Purchase, Journalist Predicts