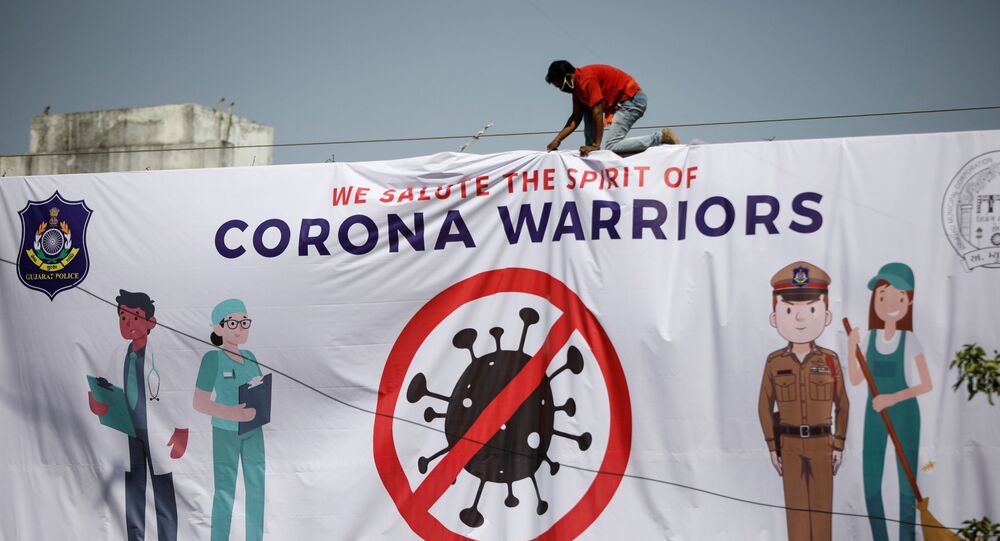 New Delhi (Sputnik): Over 1.3 billion people in India have been under lockdown for 53 days. Despite India announcing one of the world’s biggest and strictest lockdowns earlier than several of the worst-hit nations, like the US and UK, the country has witnessed a steep rise in the number of cases, from 500 infected in March to 85,000 in mid-May.

While Indian Prime Minister Narendra Modi sent a strong indication about an extension of the third phase of the lockdown, which is scheduled to end on 17 May, he also hinted that some restrictions will be eased.

He asked the chiefs of India's states to share “a broad strategy on how each one of you would want to deal with the lockdown” by 15 May.

As per the combined consensus of the states, several are in favour of a complete shutdown in containment zones with relaxations in economic activities, while some have asked for autonomy in imposing complete restrictions as well as defining red, orange, and green zones.

In a grim milestone, India’s coronavirus cases have officially surpassed China as the federal Health Ministry on Saturday reported 85,940 cases with 2,752 deaths. China, where the first case was detected in December 2019, has reported 82,933 cases and 4,633 deaths.

Likely to Remain Shut in Lockdown 4.0

Places of worship and religious congregation will probably remain prohibited during the lockdown.

© REUTERS / RUPAK DE CHOWDHURI
A bus conductor wearing a protective gear issues tickets to passengers maintaining safe social distance on the bus, after the state government resumed public bus service on limited routes after nearly seven-week lockdown to slow the spreading of the coronavirus disease (COVID-19), in Kolkata, India, May 14, 2020.

Schools, colleges, institutes, and coaching centres will be under the prohibited category.

However, offices, public transport, private taxis, as well as shops and markets will be opened with strict social distancing norms and staggered operations.

Maharashtra, the state which is jostling with the highest number of cases in the country with 29,100 infections and 1,068 deaths, is in favour of an extension with a resumption of economic activities in some parts.

In the review meeting held by chief Uddhav Thackeray, the state government expressed an intention to extend the lockdown until 31 May in the worst-affected regions like the Mumbai Metropolitan Region (MMR), Pune, Solapur, Aurangabad, and Malegaon, which have emerged as COVID-19 hotspots.

Tamil Nadu, the second most affected state with 10,100 COVID-19-positive cases, wants the lockdown to be extended until the end of May in the wake of an increase in cases, but with variations in rules with respect to the economic situation. Chennai, being the, would be part of the strict lockdown, but citizens are expected to gradually go back to work.

The Delhi government in its proposal to the centre, issued on Friday, suggested opening markets, malls, public transport - including the Delhi Metro, and all offices with half occupancy and staggered operations.

Gujarat, the third worst affected state with 9,931 COVID-19 cases, suggested that all economic activity in major urban centres except Ahmedabad, which accounts for 70% of cases in the state, be resumed.

However, Punjab Chief Minister Amarinder Singh has asked for a stringent lockdown in the state.

“We must have [a] strong lockdown. I will ensure a curfew”, said Amrinder Singh, but with the exit strategy focused on fiscal and economic empowerment of the states.

West Bengal state, governed by one of the most vocal critics of Prime Minister Narendra Modi, wants autonomy in marking zones and is in favour of a lockdown with a resumption of economic services.