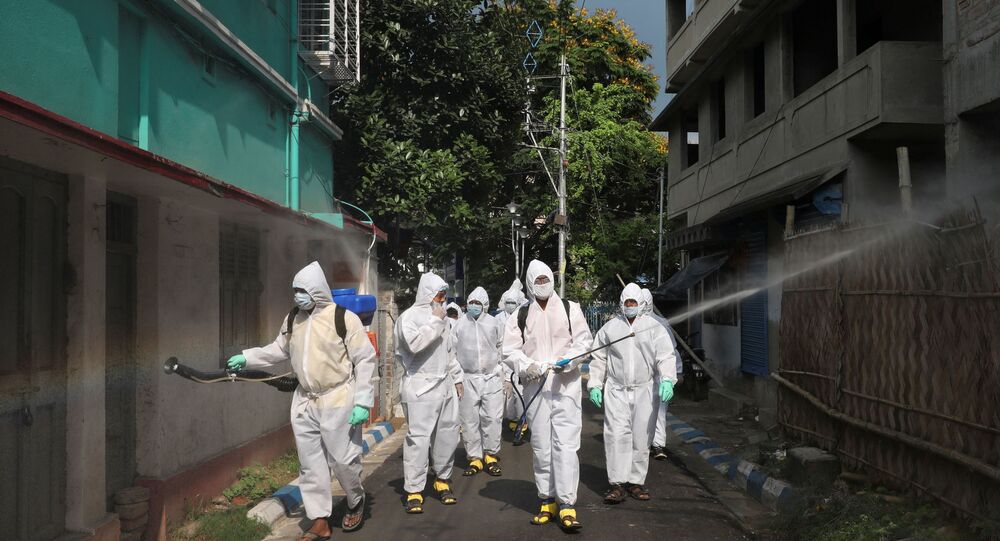 New Delhi (Sputnik): Despite the slow rate of COVID-19’s spread across the country, serious concerns have been erupting in regions where health infrastructure is in a bad state and the government fears that any relaxation at this juncture will lead to serious problems for the country.

India's Home Ministry has sent a strong indication about an extension of the 40-day lockdown, which is scheduled to end on 3 May. The ministry, responsible for implementing the lockdown across the country, said on Wednesday night that there have been tremendous gains and improvement in the situation due to the restrictions in place.

“New guidelines to fight COVID-19 will come into effect from 4th May, which shall give considerable relaxations to many districts. Details regarding this shall be communicated in the days to come”, a statement issued by the ministry reads.

The doubling time of COVID-19 cases in India was 3 - 3.25 just days before the lockdown on 24 March, and now it is around 10.2 days, the Health Ministry stated.

Earlier this week, during a review meeting with Prime Minister Narendra Modi, state chiefs expressed their support for an extension of the lockdown if necessary. However, Modi voiced concerns over the impact of the lockdown on the nation's economy.

The Home Ministry also issued an order to state governments to facilitate inter-state movement of stranded people, including migrant labourers, in the country.

© REUTERS / RUPAK DE CHOWDHURI
Fear of COVID-19 Infection Increases During Second Phase of Lockdown in India - Survey
Modi announced the first 21-day lockdown phase on 24 March, which was later extended through 3 May to curb the spread of the pandemic across the country.

The Indian Health Ministry has reported a total of 33,050 COVID-19-positive cases as of Thursday, in which 1,718 new cases have been added since 29 April.

The death toll stands at 1,074, with 67 deaths reported within 24 hours. As per the Health Ministry’s report, 629 people recovered in the past 24 hours as well, which brought the total number of cured patients in the country to 8,325, showing a recovery rate of over 24 percent.

Maharashtra, Gujarat, and Delhi have reported the highest number of cases, with 9,915, 4,082, 3,439, respectively, while Delhi also has also recorded one of the highest recovery rates (33 percent) in the country.

© CC0 / Pixabay
Man Commits Suicide in India's Kerala as State Closes Liquor Sales During Lockdown
Kerala was one of the first states where COVID-19 cases were identified, but with enormous efforts from health workers, the southern Indian state brought the pandemic under control. Out of a total of 495 cases, 369 have been cured so far.

The country has also classified its 731 districts into hotspots, non-hotspots, and non-infected (green) zones based on whether or not confirmed COVID-19 cases have been reported there.

There are around 200 districts in the country which are parts of orange zones — seen as potential hotspots.

The country spends about 3.7 percent of its gross domestic product on healthcare and it has allocated around 20,000 ventilators for the treatment of COVID-19 patients. The Indian government has ordered 50,000 more ventilators, out of which 10,000 will come from China. However, New Delhi has also directed its defence production units to manufacture kits and ventilators.