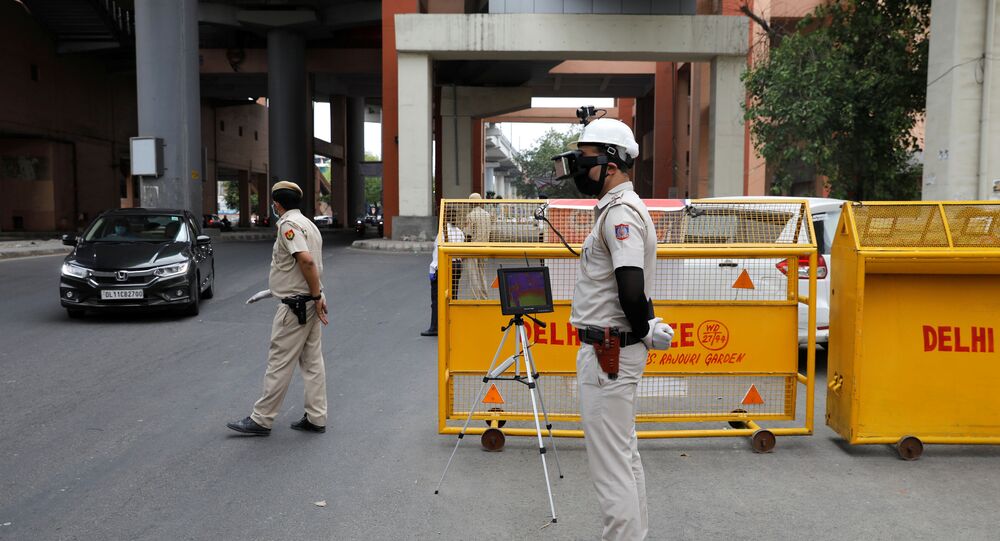 India (Sputnik): India set up a task force in early April to coordinate evidence-based research on the impact of traditional medicines on COVID-19. The interdisciplinary task force had representatives from premier research bodies, pharmaceutical, and information technology industries.

India will begin clinical trials of traditional medicines like Ayurveda to effectively prevent and treat COVID-19. The trials, which are set to start the first week of June, will also involve 80,000 police personnel from the national capital, Delhi, for prophylactic trials.

Dr Bhushan Patwardhan, Chief of India's Interdisciplinary Research and Development Task Force in an exclusive interview with Sputnik said, prophylactic trials and randomised control trials as an adjunct treatment to standard care would be carried out in five cities – Lucknow and Varanasi in Uttar Pradesh, Delhi and Mumbai, and Pune in Maharashtara.

Dr Patwardhan, a biomedical scientist himself, explained the methodology of clinical trials, saying, "we will be doing a very very rigorous clinical trial, not just a simple trial with all international norms so that the data is publishable in a reputed journal".

"The trials are interdisciplinary in a sense that although the drugs are Ayurvedic, the methodology is modern. There are two types of trials – one is prophylactic trials in which we are comparing hydroxycloroquine and Ashwagandha (Withania somnifera). It is on high-risk healthcare providers, frontline workers. The second trial is again randomised control trials as an adjunct treatment to standard care", he elaborated.

The scientist said the Task Force is not "compromising standard of care for our recommendations, because standard of care will be received by all patients who are infected, but we will add on three different drugs. We are working on a combination of three drugs and a third one is a formulation which was developed by the Ministry of AYUSH (Ayurveda, Yoga and Naturopathy, Unani, Siddha and Homoeopathy) 20-25 years ago for the treatment of malaria. That drug is getting repurposed to see whether it is effective in this condition or not".

© AFP 2020 / CHANDAN KHANNA
Refusal to Accept Empirical Evidence in Ayurveda Unethical, Says India’s COVID-19 Task Force Chief
Dr Patwardhan said the lockdown and social distancing are correct measures, but there should be some physical intervention also. He suggested that simple yoga breathing exercises strengthen the lungs and respiratory system or the drinking of hot water, which are time-tested methods.

While 80,000 police personnel in the national capital will be getting AYUSH interventions to protect from the infection, Chandigarh will be the next city for a similar trial. Many states like Telangana have also sought to introduce these trials on their frontline COVID-19 fighters to protect them, said Dr Patwardhan.

The Task Force chief earlier decried efforts to look down at traditional medicines in standard care for COVID-19. Terming it "unethical", he said it is neither in people's interest nor that of science to turn away from these methods.

"The resource-poor healthcare system in India might not be able to sustain an emergency response on the scale required for the management of the global pandemic, which requires a multidisciplinary approach", maintained Dr Patwardhan.

India currently has 85,940 cases, which includes 30,153 recoveries and 2,752 deaths, according to data released on Saturday by the federal Health Ministry.