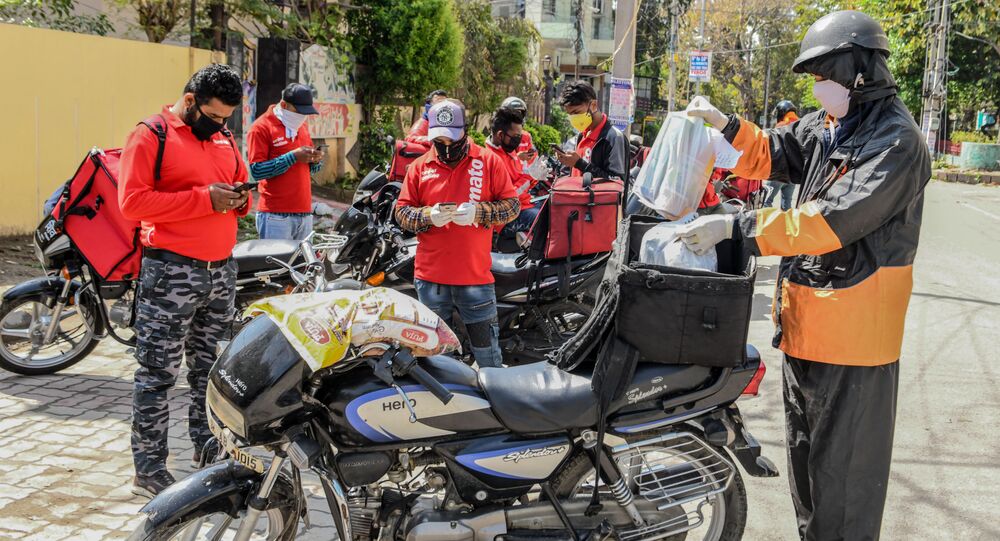 New Delhi (Sputnik): It’s been over 50 days now since India went into the world’s biggest lockdown in its battle with the coronavirus pandemic. Amid the global health crisis, the World Bank has predicted India’s economy will decline by 5 percent this year. Owing to sluggish financial growth, Indians are fearing job losses.

Despite Prime Minister Narendra Modi’s advice not to, India’s leading online food ordering platform Zomato on Monday announced up to 50 percent salary reductions for those employees who remain at the company after its 13 percent employee lay off wave.

Deepinder Goyal, the 36-year old CEO of Zomato announced job cuts for over 600 workers through Zoom calls, emphasising that the firm is preparing for worse, the media reported. Goyal also reportedly said the drastic changes that several businesses including theirs have witnessed may be permanent.

“We do not foresee having enough work for all our employees", the CEO, who expects a 25-40 percent shrink in the restaurant business in the next few months was quoted as saying

Established in 2008, the food ordering app, that operates via 150 offices worldwide, expanded outside of India in 2012, reaching countries including the UAE, Australia, New Zealand, Turkey, Portugal, the Philippines, Indonesia, and Lebanon.

The company, which claims to be present in over 10,000 cities, working with 1.4 million restaurant partners globally acquired American cab hailing firm Uber’s India-based food delivery business in an all-stock transaction in January. It however, stands at the curve of uncertainity amid the global economic crisis.

The International Monetary Fund (IMF) has forecast that the recession following industries post-corona will be worse than the Great Depression – which so far has been regarded as the worst economic downturn in the history of the industrialised world, lasting from 1929 to 1939.