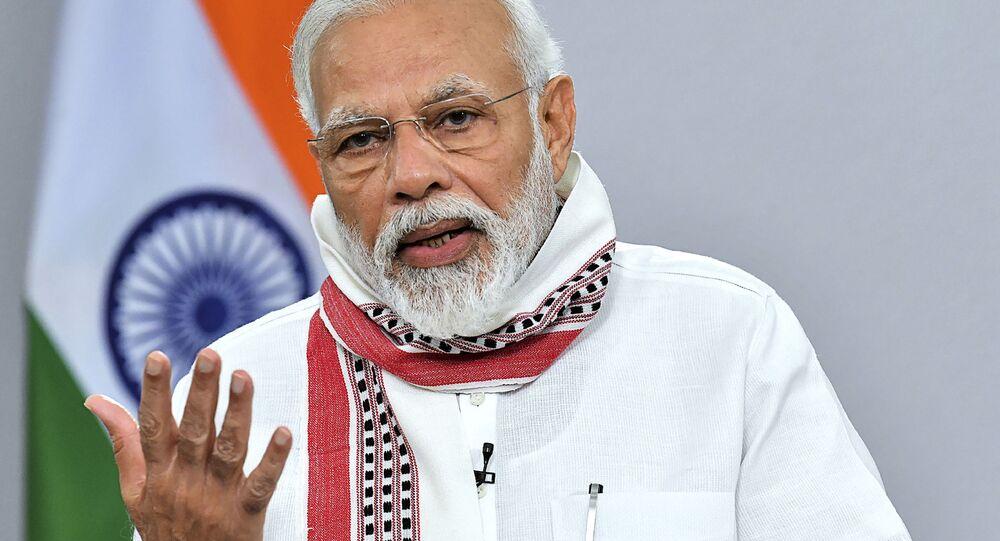 New Delhi (Sputnik): Indian Prime Minister Narendra Modi on Tuesday (12 May) announced one of the nation's biggest-yet economic stimulus packages, worth US $266 billion, to boost the COVID-19-hit economy.

India’s prominent trade and industrial organisations have welcomed a $266 billion stimulus package announced by Narendra Modi, but exporters are wary of its outcome.

The Confederation of Indian Industry, which represents about 300,000 enterprises throughout the country, noted the Prime Minister’s reflection that land, labour, liquidity and the simplification of laws are the key challenges facing the economy.

“Reforms in these four areas will truly unleash the next wave of economic growth within this crisis situation,” said Chandrajit Banerjee, Director General of the Confederation of Indian Industry.

Another umbrella body of Indian trade, industry and professionals with over 450,000 members felt the mega package would provide a sense of relief and revive self-confidence among economic stakeholders.

“The five pillars of building a Self-Reliant India would take us towards becoming a credible global force that reaches out to the world from a position of strength but with a sense of responsibility and humility," said Deepak Sood, Secretary General of the Associated Chambers of Commerce and Industry of India.

Expressing similar sentiments, Dr. S.P. Sharma, Chief Economist and Director General of the Punjab, Haryana and Delhi Chamber of Commerce and Industry said, “Strengthening of the local supply chains, agriculture and food supply chain will not only fulfil the demand but also strengthen the supply dynamics and create tremendous employment opportunities for the growing young workforce, particularly in rural areas.”

Exporters, however, were sceptical about the thrust of Prime Minister Modi’s statement, noting that the localisation of supply chains would make market access for exports more difficult.

“However, if we can integrate into the global value chain, we are up for a quantum jump in exports,” said Sharad Kumar Saraf, president of the Federation of Indian Export Organisations.

As he announced the stimulus package, Modi also called for a self-reliant India, and wanted his fellow citizens to promote local products instead of imports. He also wanted Indian industry to be able to compete globally by focusing on better quality.

Meanwhile, the economic wing of Rashtriya Swayamsevak Sangh has welcomed the stimulus package. Chief of Swadeshi Jagaran Manch (Forum for a National Awakening) Aswhani Mahajan described it as “sunrise for a new day.”

“Prime Minister Modi, with his historic speech, has set the foundation for India to take not only quantum jump, but also create more opportunities and respect for domestic entrepreneurs,” Mahajan said in a statement.

Modi’s televised address to the nation, his fourth since the COVID-19 outbreak was just ahead of the end of phase 3 of the lockdown to tackle the global pandemic. He said the lockdown would continue to phase 4, but its contours would be announced in the next few days.

Since the first case of COVID-19 was detected in India on 30 January, the country has witnessed 74,281 cases as of Wednesday, which included 24,386 cured cases and 2,415 deaths, according to the federal health ministry.