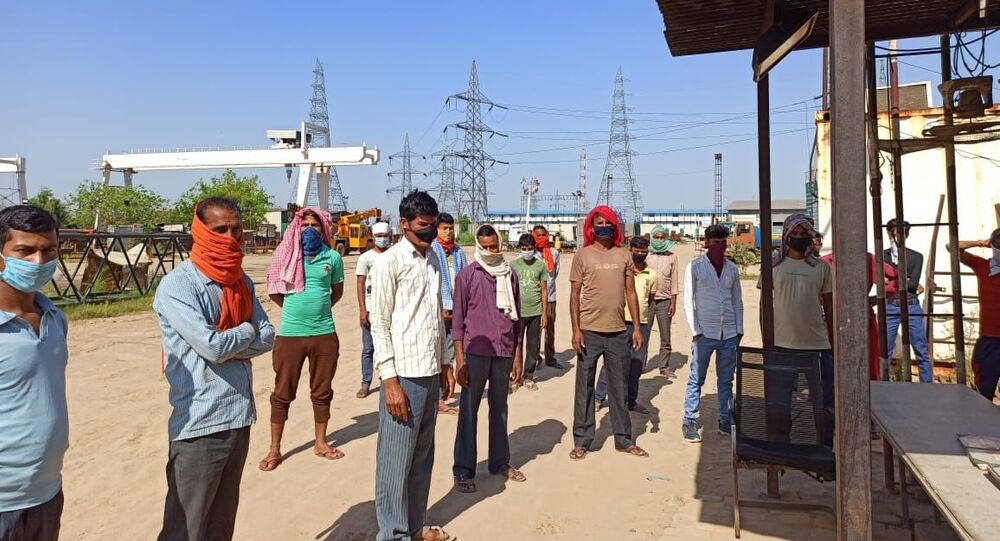 New Delhi (Sputnik): The coronavirus pandemic has put pressure on India’s healthcare system, which is facing a shortage of protective equipment. The lockdown has also left around 10 million workers stranded across the country.

One of India's biggest trade unions, the Centre of Indian Trade Unions (CITU), has asked all frontline workers to observe “Demands Day” on 14 May 2020 over demands for better security for health workers and migrant labourers.

The union has asked people to wear badges and carry placards in protest while on duty.

“Clapping and clanging of utensils and showering flowers to a few may be symbolic respect and appreciation for pseudo satisfaction for a few, but will help little the real corona warriors in their fight for life- theirs and of others,” Tapan Sen, General Secretary of CITU told Sputnik.

The union has made several demands, including INR 5 million ($66,534) insurance cover for all frontline workers who die while on duty and the allocation of 5 percent of annual national income to the health sector.

For migrant workers, the union is demanding free food, financial aid and safe passage for home to all the people stranded in various locations around India. It also wants the Uttar Pradesh state government to repeal its recent labour laws.

"We appeal to all the other workers/ employees and people, in general, to express solidarity to the frontline workers in all possible ways- by wearing badges/ showing banners/placards etc supporting their demands, at their respective doorsteps, workplaces, wherever they are open, offices etc, distribution of food, masks and other safety gear," urged Sen while asking people to maintain physical distance.

According to the Government, 548 people involved in medical work across the country including doctors, nurses and paramedical staff have been infected with the virus so far.

“Many cases of workers collapsed and died on duty were reported, but they were not even got tested for Covid -19. In most of the states, most of these workers are not entitled to the much publicized Rs.50 lakh insurance package’; and the insurance do not cover the expenses for treatment!,” Sen stated, raising the alarm over the situation of health care workers in the country.

The spike in cases amongst medics is cited due to the shortfall of personal protective equipment (PPE). Doctors are reportedly overworked and are forced to work for at least eight hours without drinking water or taking a bathroom break.

India ordered the import of 15 million personal protective equipment (PPE) kits, including gowns and masks, from China in mid-April to meet demand.