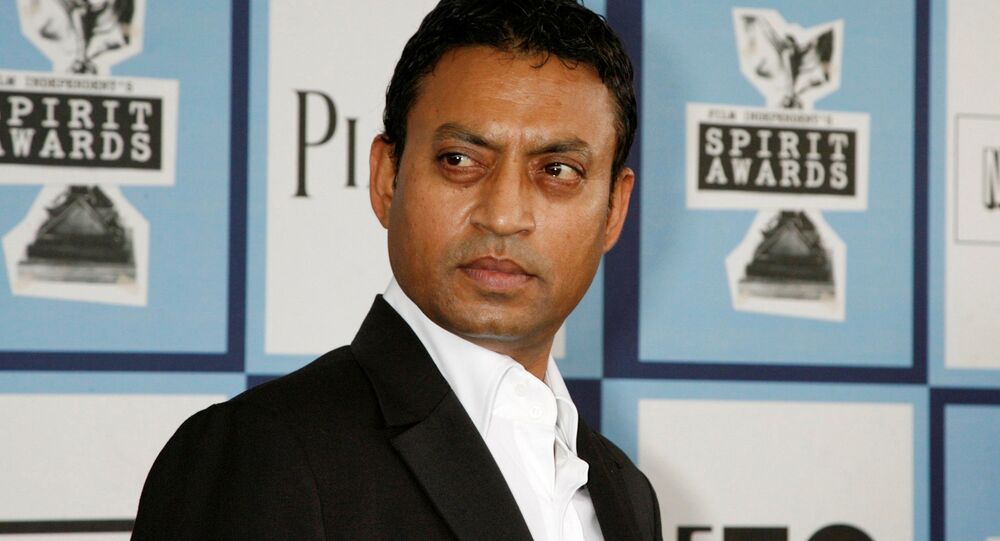 New Delhi (India): Have you ever felt a strong sense of personal loss following the demise of a public figure? Many Indians and Bollywood buffs around the globe stand in solidarity on 29 April as they express online that the world of cinema has just lost a legend after iconic Indian actor Irrfan Khan passed away in Mumbai, aged 53.

Legendary actor Irrfan breathed his last on Wednesday at Mumbai’s Kokilaben Ambani Hospital, where he was undergoing treatment for a colon infection. He had been battling health issues for two years.

In 2018, Irrfan was diagnosed with a neuroendocrine tumour (a type of cancer), for which he underwent treatment in the UK and returned to India to complete the shoot of his last film – Angrezi Medium, released earlier this year.

Having starred in over 50 Indian films, Irrfan also featured in several big-budget international projects, including the Oscar-winning Slumdog Millionaire, Life of Pi, Jurassic World, The Amazing Spiderman, and Inferno.

Born in 1967 in India’s Pink City – Jaipur – Irrfan contributed to the global entertainment industry with his diverse acting skills for over 30 years. In 1988, he made his debut on the silver screen with the movie “Salaam Bombay!” – which went on to become an Academy Award nominee.

The news of his demise – which comes just three days after his mother died in Jaipur aged 95 – was first shared on Twitter by filmmaker Shoojit Sircar.

​What followed Sircar’s tweet was an overwhelming flood of messages from Bollywood biggies, including Amitabh Bachchan, Karan Johar, and Ajay Devgn, among others, along with heartfelt condolences from Irrfan’s fans around the world.

Within 10 minutes of the news of @irrfank 's demise breaking, all of the #TwitterTrends in India changed .. honoring the legendary actor. #IrrfanKhan #Irrfan #RIPIrrfanKhan pic.twitter.com/ovRg8iFRy9

Thank you for those indelible movie memories....thank you for raising the bar as an artist ...thank you for enriching our Cinema....we will miss you terribly Irrfan but will always always be immensely grateful for your presence in our lives.....our cinema....we salute you🙏❤️😪

So heartbroken on the demise of #IrrfanKhan sir. We are shocked & just sad. My condolences to the family .You will live on forever in our hearts sir. Thank you for entertaining us and giving us such powerful performances .You were an institution & an inspirational force . RIP 🙏🏻

Gone too soon, bt love for you will nvr fade away from our hearts. One of the finest actor, India had even produced.
Inspirational for everyone around the world. You made people believe Talent >>> Looks.

​Of the host of awards he received for his work, the actor was also conferred with the coveted Padma Shri, the fourth highest civilian honour in India.

In 2015, when the actor bagged a role in the movie Jurassic World, he told a Hollywood reporter, “When the first Jurassic Park came out, I barely had the money to see it, and now after 22 years, I’m playing a part, in this” – a quote that inspired millions around the world.

India loses the legend. @irrfank -- thank you for making us believe that a kid who once could only afford to watch a classic like Jurassic Park -- can also one day STAR in it!! <3

​In the last posts on his Twitter handle, the actor expressed compassion for the exodus of migrant labourers who were walking across India to reach their respective hometowns after a nationwide lockdown was imposed in the country to tackle the coronavirus situation.

I support this because I believe we need to change from the roots#gramsevasangha #oneworld pic.twitter.com/ecgY9v4wud

Time to reflect why #humancourse have pushed planet and human beings against each other. When #humansarequartined #planet has started breathing again. Many animals are walking freely now, may be #antartica will see more ice.#KaronaKuch pic.twitter.com/Q9PBMSjbKk

After the release of his last film, Irrfan, who could not be a part of its promotions due to health reasons, left the audience with the last of his addresses via an audio message. The last line of his audio message ironically said, "wait for me."

His message is also circulating heavily on social media.

This was Irrfan Khan's last message for us, he talked about being positive and kind to each other
He asked us to wait for him
You know what sir? We will wait for you pic.twitter.com/8jWHIW9rzd

EXCLUSIVE: This was Irrfan Khan’s last message to us while promoting his film Angrezi Medium. His last words will surely make you emotional. He shall remain with us forever.#RIPIrrfanKhan #GoneTooSoon pic.twitter.com/Dr4ojtuacY

​​Irrfan is now survived by his wife Sutapa Sikdar and sons Babil and Ayan.