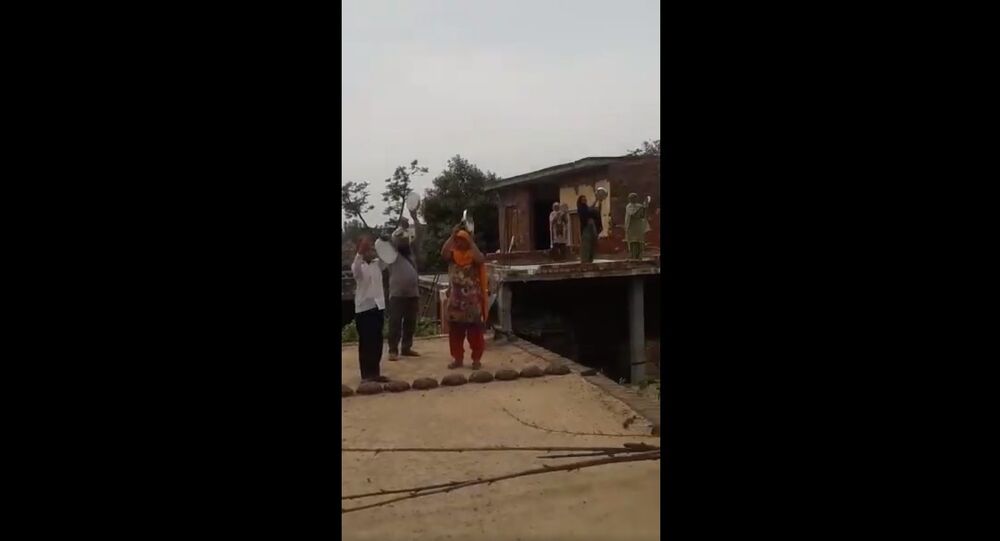 The Flipside of Clap for Carers: Villagers in Indian State of Punjab Demand Food by Banging Plates

New Delhi (Sputnik): In a televised address to the nation on 19 March, Indian Prime Minister Narendra Modi requested that people express their gratitude to medical practitioners and health workers by clapping and banging plates from their balconies; they are among the few who have been allowed to move freely during the COVID-19 health emergency.

Taking a cue from Prime Minister Narendra Modi’s call to clap in solidarity with emergency service providers, villagers in the Indian state of Punjab have used the proposed way to draw the government's attention to their plight, as they now lack jobs and a source of income.

A group of villagers, mostly day labourers, were filmed banging plates as a way to demand food, as they claimed they were starving without jobs.

After the video hit the internet, a number of social media users expressed their anguish as they felt the lock down was fine but worried about the fate of people who have to earn on a daily basis, supporting themselves by doing work.

Children are eating grass in PM's Constituency. Conduct disorder of PM can lead to millions of poor dead. Without giving any thoughts to the plight of unorganised sector, daily wedge earners he makes announcements & see the results! https://t.co/upCG96BaNT

They could have run out.Not that unbelievable. 🤷🏽‍♀️

They have pucca houses, hard to believe they don't have vegetables and grains even inspite being in farm area.

​On Tuesday, Indian Prime Minister Modi announced a countrywide lockdown to contain the spread of COVID-19 in the country, which has so far taken the lives of 17 people.

Two days later, Finance Minister Nirmala Sitharman announced a slew of measures worth $22.36 billion for the poor, daily wage-earners who have lost their jobs and women.

According to the latest data released by India’s federal Health and Family Welfare Ministry, there were 724 active cases of the infection on Friday.