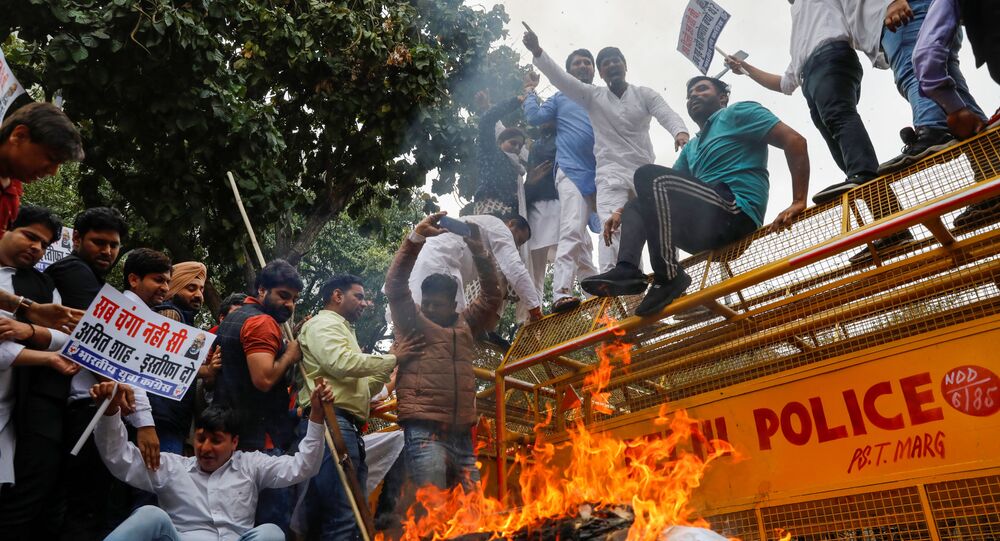 New Delhi (Sputnik): India has been in turmoil since December when the Parliament passed the Citizenship Amendment Act (CAA). The law has sparked nationwide protests as Muslims claimed that it is against the secular nature of the Indian Constitution and discriminates against their community.

Filing a counter affidavit in the Supreme Court of India against a plea challenging the Citizenship Amendment Act (CAA), the federal government said that the CAA is a “benign piece of legislation which seeks to provide a relaxation, in the nature of an amnesty, to specific communities from the specified countries with a clear cut-off date”.

CAA is law that paves way for illegal immigrants from six religious minorities from Afghanistan, Bangladesh and Pakistan – who entered India before 2015 and faced persecution at home to obtain Indian citizenship. The communities that it seeks to grant citizenship are: Hindus, Sikhs, Christians, Jains, Parsis and Buddhists; the law, however, excludes Muslims, which has been at the core of the months-long protests.

The legislation has been targeted by opposition parties and civil rights groups, who claimed that it grants citizenship on the basis of religion, and is against the secular constitution.

The government has strongly rejected these claims, stating in court that the law doesn’t infringe upon any right that existed prior to the enactment of the amendment and seeks to address “specific problems in specific countries” such as persecution on the ground of religion.

Backing its argument, the Narendra Modi government said that even the partition of India was done on the basis of religion.

Stating that the issues of entitlement and conferring of citizenship lie within the domain of competent legislature, the government said the CAA may not be within the scope of judicial review.

“By the very nature of the question regarding citizenship of the country and issues pertaining thereto, the said subject matter may not be within the scope of judicial review...” the government said.

Ever since the proposed amendments to CAA were passed, it has sparked fear of marginalisation among the Muslim community, which comprise 15 percent of the Indian population. This has led to widespread protest both for and against the law.

The most recent clashes between the pro and anti-CAA factions turned into a severe communal riot in Delhi and claimed 53 lives leaving over 400 people injured. Similarly, a sit-in protest spearheaded by women is ongoing in Delhi.

Fears have intensified with the so-called National Register of Citizens (NRC) exercise – to identify “bonafide” citizens of India - with some members of the Muslim community claiming that they might end up losing their citizenship and will be forced to live in “detention camps”.

The government's mention of NRC in the affidavit comes in sharp contrast to the Home Minister Amit Shah's statement in an interview that "there have been no talks held on nationwide NRC".

The government in court termed the NRC a necessary exercise for any sovereign country to identify its citizens and is a census exercise similar to those undertaken in many other countries such as Afghanistan and Bangladesh.