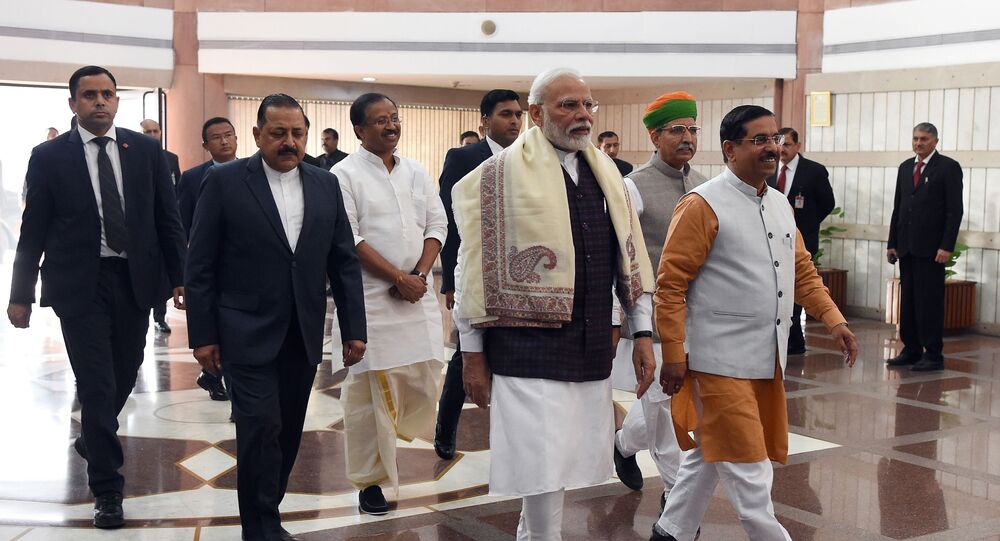 New Delhi (Sputnik): The Indian Parliament’s lower house, Lok Sabha, has been witnessing opposition parties joining ranks to demand the government discuss the recent violence in northeast Delhi that left at least 47 dead and over 350 injured.

Indian Parliamentary Affairs Minister Pralhad Joshi on Wednesday announced that the government is ready to discuss the Delhi riots  in the lower house on 11 March and in the upper house the following day.

The protesting parliamentarians in the lower house, Lok Sabha, however, were reluctant to let the parliament function until a debate is held. Lok Sabha Speaker Om Birla has warned the lawmakers of suspension if they continue to disrupt the House's proceedings.

Rajya Sabha has been adjourned till 11am tomorrow following uproar by Opposition MPs over Delhi violence. pic.twitter.com/4LNzCI424j

​Meanwhile, Rajya Sabha, the upper house of the Parliament also stood adjourned for the day as the opposition parties continued to demand discussions on the issue and resignation of Home Minister Amit Shah for “for failure to contain the violence in Delhi” that claimed 47 lives and injured over 350.

Lawmakers from the opposition stood in front of the Mahatma Gandhi statue inside parliament demanding Shah’s resignation.

​The parliament has been witnessing stormy scenes over violence in Delhi with members walking up to the well of the House with placards and posters. Reports of physical assault during the chaos also surfaced with parliamentarians blaming each other for the violence.

Northeastern Delhi, epicentre of the riots, saw three days of deadly violence after pro- and anti-citizenship supporters clashed on 23 February. Forty-seven people, including police personnel, lost their lives in the wave of violence that resulted in the imposition of a curfew, shutting down of schools and deployment of paramilitary forces to contain it.