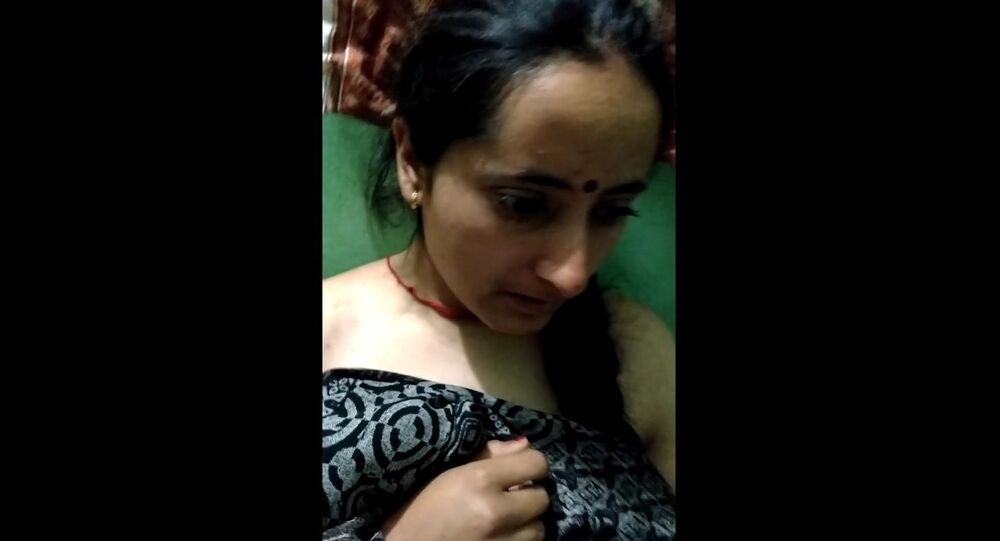 New Delhi (Sputnik): Domestic violence against women is widely prevalent in India. National Family Health Survey (NFHS) data indicates that over 30% of Indian women are physically, sexually or emotionally abused by their husbands. As per the 2018 National Crime Records Bureau, 103,272 cases of domestic violence were reported.

A video of a woman from the Indian city of Mandi, being beaten-up while her hands and feet were tied (allegedly by her in-laws and husband), has gone viral on social media, leaving many netizens flabberghasted.

The victim, Khushboo, was married last year on 26 January according to her relative. In the 2.37- minute long video from the Indian state of Himachal Pradesh, it is obvious that the woman suffered injuries to her arms, back and legs.

The viral video caused a social media uproar, with many netizens calling for stringent police action in the matter. The woman who speaks in the background of the video says that Khushboo is the victim of physical and emotional violence in her marriage, where her husband and mother-in-law beat her mercilessly.

A Facebook user Ankush Sharma said: "A complaint should be filed with the women's grievance cell, and show this [video] to police as it is, you may get justice."

"So much injustice has been meted out to this sister. The culprits should be punished," said another Facebook user Mohd. Arif.

Stating the people who did this to the woman should meet the same fate, another Facebook user Meenakshi Verma said: "You should lodge a complaint. Can you share her husband's Facebook ID, let us see this 'brave man'."

Another Facebook user Ranjit Kanwar asked: "Is there not a daughter in the house, if their daughter is beaten-up like this, they will feel the same. These people are not humans but animals."

The woman responsible for the voice-over of the video also says that the government keeps talking about "Beti Bachao, Beti Padhao programme (Save Girl Child, Educate Girl Child)" but what about the daughters being beaten-up like this?

The Indian government's campaign aims to generate public awareness and improve the efficiency of welfare services intended for girls in the country.

Just a few hours after the video was uploaded, the social media fury prompted police action in the matter leading to Mandi police registering a complaint against the accused.

On their Facebook page, Mandi police said: "A video has gone viral on social media, in which it is being said that a woman's husband and in-laws have beaten her. In this context, people are being informed that against this misbehaviour with the woman, a complaint has been filed in the police station, at the station of the district, under Section 498 (a) and 323 of the Indian Penal Code. Investigation in the matter is on, and action will be taken against the culprits."

India has a stringent provision for such atrocities against married women. Section 498 (a) of the Indian Penal Code covers instances where husbands or their relatives subject a woman to cruelty, while Section 323 is on punishment for voluntarily causing harm. The Section was introduced in 1983 to curb the menace of cruelty to married women, which often was associated with so-called dowry deaths.