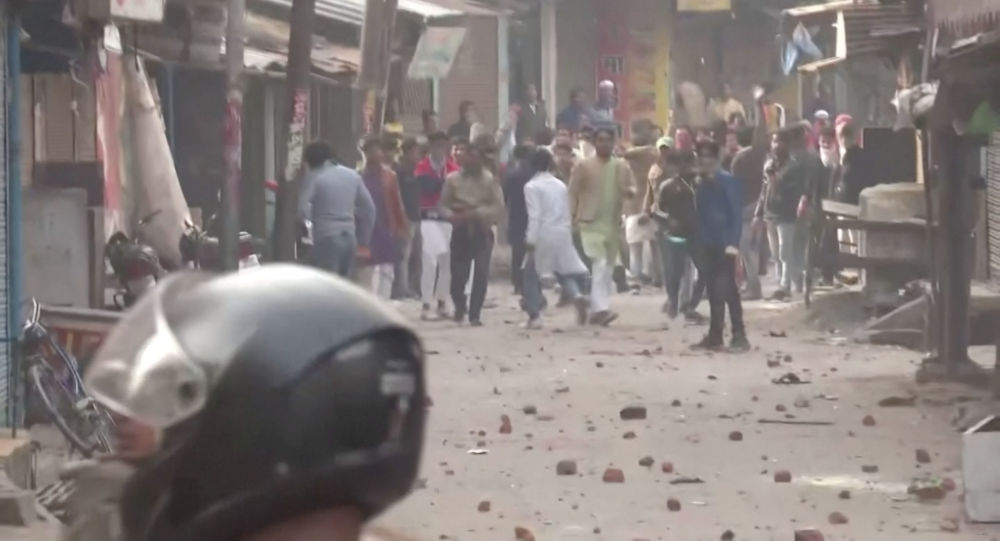 New Delhi (Sputnik): As India continues to witness widespread protests over the new Citizenship law, passed by the federal government in December 2019, and granting citizenship to persecuted immigrants from three neighbouring countries; "police action" against protestors has come into question.

The Delhi Minorities Commission has written to the Chief Justice of India Sharad Arvind Bobde, asking him to take suo motu cognizance of police action on protesters in India, as the public staged demonstrations against the Citizenship Amendment Act, 2019 (CAA) and National Register of Citizens (NRC).

Chairman of the Commission Zafarul-Islam Khan called the police behaviour “highly objectionable” and opposed the frequent shutdowns of the internet and mobile services.

“Police behaviour in various states has been highly objectionable, from banning protests despite their peaceful nature, clamping down on Section 144, closing down internet and mobile services totally unnecessarily, only to prevent people from exercising their constitutional rights,” Delhi Minorities Commission Chairman Dr Zafarul-Islam Khan stated to India’s chief justice in a letter.

Videos and photos allegedly showing “police brutality” on social media is the proof of their violent action on peaceful protesters, he added.

“Police were not content with this but went much beyond by attacking peaceful protesters in Jamia Millia Islamia on 15 December 2019 and later in many places like Meerut, Bijnor, Seemapuri in Delhi, Varanasi, Mangalore etc., where they not only broke protesters’ arms, legs and skulls, but killed about two dozen protesters, and also invaded private homes smashing whatever they found,” he added.

The letter referred to student-police clashes at Jamia Milia Islamia University where police entered the university and lobbed tear gas shells and resorted to baton charging on protesting students. The Delhi Police, however, asserted that they used minimum force on the students and were responding to stone-pelting by the protestors.

The Commission has also enumerated 87 instances of police action against protesters in several states.

Khan appealed to the apex court to take action not only to “punish the erring police officers during the current unrest but also to set an example of how the Honorable Supreme Court will deal with such behaviour in the future to protect citizens’ civil and human rights”.

At least 23 people have lost their lives so far during anti-Citizenship Amendment Act (CAA)-related protests over the past weeks.

The new Citizenship Amendment Act grants citizenship to Hindus, Sikhs, Buddhists, Jains, Parsis and Christians who fled religious persecution in Pakistan, Bangladesh, and Afghanistan and arrived in India, on or before 31 December 2014.

Many view the legislation as a violation of the Indian constitution by mandating citizenship based on religion, and because it excludes Muslims, however, Prime Minister Narendra Modi stressed that the law does discriminate against any religious group.

More than 2,000 people have been arrested and nearly 5,000 others detained during anti-CAA protests in different parts of the country.