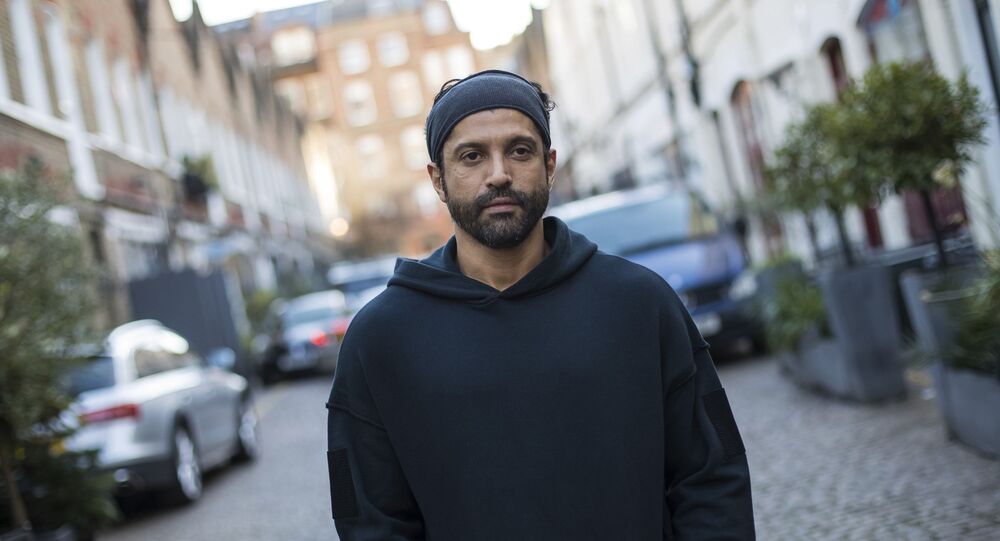 New Delhi (Sputnik): India has witnessed widespread protests against the enactment of the controversial Citizenship Amendment Act (CAA) entitling illegal non-Muslim migrants from three neighbouring countries eligible for citizenship, if they arrived in the country prior to 2015.

Several Bollywood celebrities have raised their voices against the contentious law, including actor Farhan Akhtar who has taken a strong stand against the CAA, causing him to encounter legal troubles in December 2019.

Letting bygones be bygones, the 45-year-old actor was trying to move on to 2020 by indulging himself in his upcoming projects, but netizens believe that he let himself get too involved in promoting anti-CAA protests just to get publicity for his movies.

On Thursday, Farhan took to Instagram and Twitter to share a still from one of his 2020-releases titled “Toofan” that translates to “storm” in English. The picture shows the beefed-up actor with flexed muscles, dressed up as a boxer in blue sportswear.

​While the actor's muscles alone should have stolen the thunder, the post on both the social media platforms began garnering hateful responses from netizens, accusing him of being an attention seeker and anti-national. Several people also urged others to boycott “Toofan”, which is slated for an October release.

We are not interested in your movies anymore as a peaceful non religious protest against #ISupportCAA . Boycott #Toofan . Let show these pseudusecular our soft power. Jai Hind

Is this the film for which you first spread fake news, incited people, sent out wrong map of India (straight from the ISI files) and then went to shoot in #CAA_NRC_Protest in August Kranti Maidan with your team 🤔

Ok so this explains why you wanted quick publicity with CAA protest. Usually Bollywoodias get active when movie release is around corner.

If so many people are saying #BoycottToofan then there must be something.
I don't want to go in detail.
But I will never watch your movie

​On 18 December, Farhan asked Mumbai residents to join a protest rally against CAA and the National Register of Citizens (NRC) that requires Indians to prove their ethnicity with paperwork and documents.

​Farhan’s tweet was chased by a response from a senior police officer Sandeep Mittal who highlighted that by triggering people to demonstrate protests, the actor himself had broken the laws.

​In addition, netizens also noted that the map of India, that came with Farhan’s tweet supporting the protests was also inaccurate, showing some parts of Jammu and Kashmir not marked under India.

The actor later clarified that the graphic he shared was inaccurate and that he regretted not noticing the blunder.

Several opposition parties, students, and people from other walks of life have claimed that the law violates the Constitution. The government and Indian Prime Minister Narendra Modi have, however, mounted a campaign to dispel any misinformation about the law and insisted that it is not anti-Muslim.