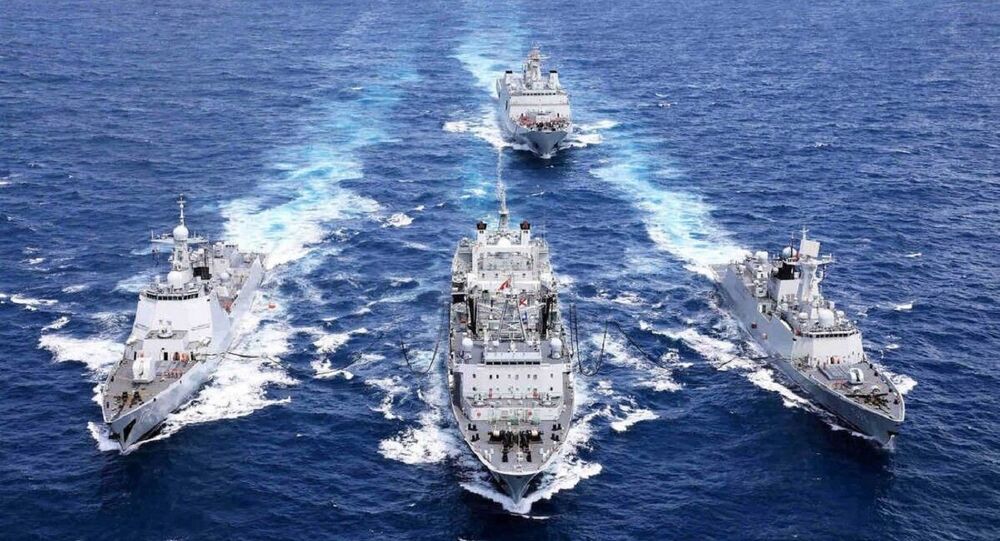 Earlier this week, the Iranian embassy to Russia announced that Adm. Hossein Khanzadi, the country's navy commander, will attend the Russian naval parade in St. Petersburg after receiving an invitation from Russian Defense Minister Sergei Shoigu.

An Iranian destroyer and a huge support vessel were sighted cruising through the Baltic Sea on Thursday, apparently, en route to Russia for a military parade that will be held on July 25, the Danish Defense Ministry announced.

The Royal Danish Air Force photographed the new Iranian destroyer Sahand and the intelligence-gathering vessel Makran traveling near the Danish island of Bornholm.

"It is expected that they are on their way to the annual naval parade in St. Petersburg," the ministry wrote on Twitter.

​The Sahand is expected to take part in the parade on Sunday, according to IRNA, among other ships, the total number of which will reach 54.

According to reports, in May, the two ships left Iran's Bandar Abbas harbor. On the deck of the Makran, seven Iranian fast-attack ships traditionally associated with the country's paramilitary Revolutionary Guard were reportedly witnessed.

The seven covered vessels remained atop the Makran, according to Danish military photos. The Arab News reported that the Makran's fast-attack craft are similar to those used by the Coast Guard in engagements with US warships in the Persian Gulf and the Strait of Hormuz.

The US media widely reported earlier that the ships' final destination could be Venezuela, citing anonymous sources. The vessels, however, have circumnavigated Africa's Cape of Good Hope and continued north on an unusually extended voyage by Iran's navy.

On Sunday, the Russian fleet's 325th anniversary will be commemorated with a naval parade on the Neva River in St. Petersburg. Along with Russian vessels, warships from Iran, India, and Pakistan are expected to transit at the parade, according to Defense Minister Shoigu.