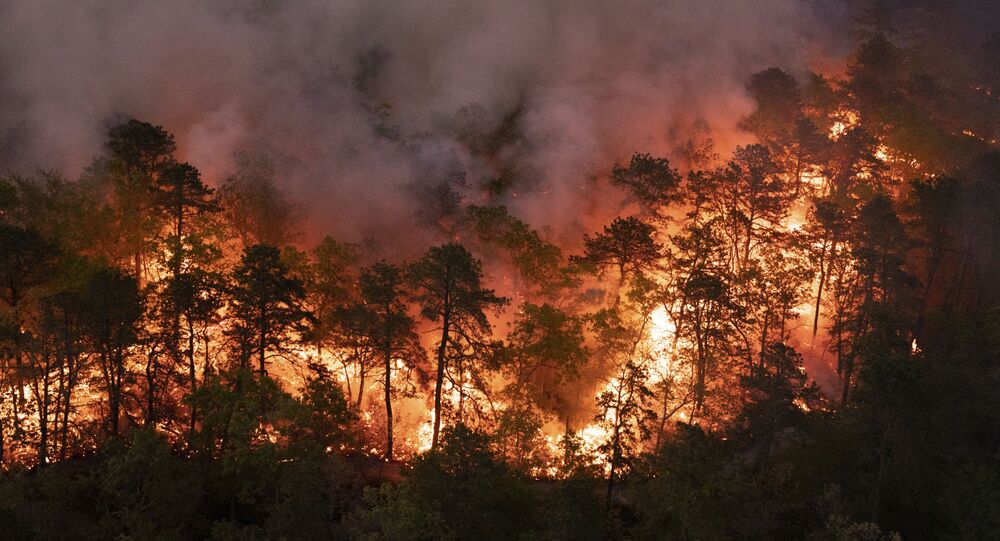 Despite being heavily reliant on green energy for domestic use, Norway remains one of the world's leading exporters of energy resources, covering about 2 percent of global oil demand and 3 percent of natural gas demand. At present, there are about 90 fields in production on the Norwegian shelf.

The unparallelled heat wave saw Canada's national record jump from 45 degrees to 49.6 degrees Celsius in a matter of three days, with widespread wildfires bringing about destruction. As many as 170 wildfires were ravaging the province of British Columbia alone this weekend.

Residents of the Canadian town of Lytton were forced to evacuate at short notice when it was suddenly surrounded by fires. The authorities subsequently reported that 90 percent of the town disappeared in flames.

The heat also paralysed swaths of the United States unaccustomed to such weather, with temperatures well over 40 degrees. Authorities in both countries estimate that the heat wave claimed hundreds of lives.

"This is the global warming of our time: an ordinary Canadian town, Lytton in British Columbia, is on fire. [Prime Minister] Erna Solberg, [Petroleum Minister] Tina Bru and the parliamentary majority are directly responsible", biologist and parliamentary candidate for the Greens Rasmus Hansson told the newspaper Dagbladet, adding that Lytton and other places affected by extreme weather could demand compensation from Norway.

Hansson labelled Norway "the world's seventh largest exporter of carbon dioxide" and ventured that the current government is going "full throttle" by opening new oil fields, including the Breidablikk field in the North Sea.

The Greens, by contrast, seek a gradual phasing out of the petroleum branch, a staple of the Norwegian economy and a pillar of its well-being, by 2035.

Petroleum Minister Tina Bru, however, struck back against the allegations.

"These are well-known tones from the Greens. This is what they tend to do: whenever major natural disasters occur around the world, they try to blame us and hold us almost personally responsible. It falls, of course, on its own unreasonableness", Bru told Dagbladeet. "I simply think that it is quite embarrassing to come up with such attacks".

© AFP 2021 / DANIEL SANNUM LAUTEN
Green Switch? Norwegian Government Parties Aim to Stop New Oil Exploration
Bru emphasised that the Norwegian government's policy is well in line with the goals set by the Paris Agreement and underscored that the country's greenhouse emissions have steadily decreased in recent years, reaching 49.3 million tonnes, down from 51.2 million tonnes in 1990, but still somewhat higher than the climate target of 48.6 million tonnes.

The government aims to cut the emissions by at least 50 percent by 2030 and at least 90 percent by 2050. According to Bru, Norway is well on its way.

"We have delivered a climate plan, and we are also the first western country to strengthen our climate goal under the Paris Agreement. So we have a good climate policy, and it is also necessary, precisely because of what we see in Canada. But neither I, Erna Solberg nor the government is personally responsible for what is happening now", Bru underscored.

While heavily relying on green energy for domestic use, Norway is one of the world's leaders in exports of energy resources, covering about 2 percent of global oil demand and 3 percent of natural gas demand. At present, there are about 90 fields in production on the Norwegian shelf.