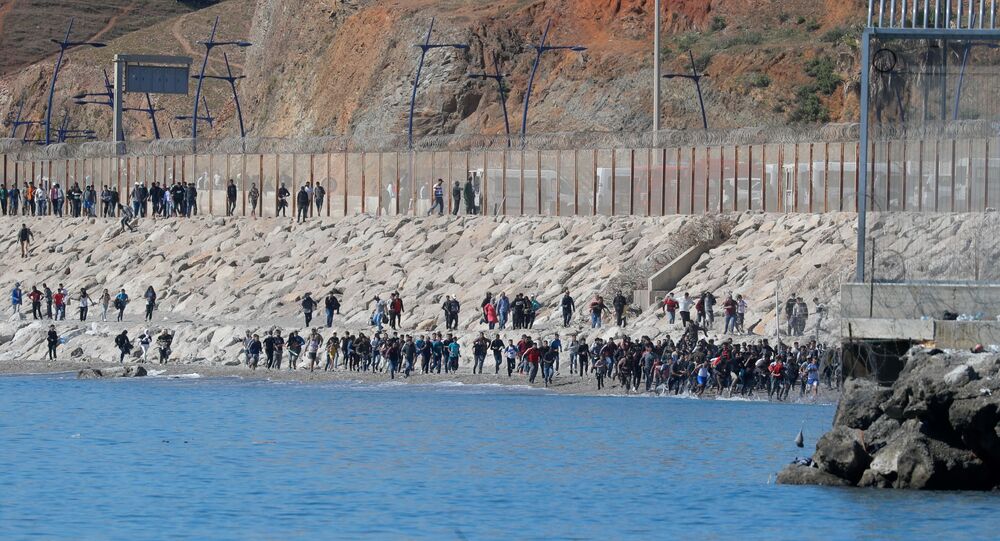 A Moroccan minister previously hinted that the country’s decision to relax border controls was linked to Madrid's decision to admit for COVID treatment the leader of the Polisario Front – a militant group fighting against the kingdom for the independence of Western Sahara.

Spain's Defence Minister Margarita Robles has accused Morocco of "blackmail" after the country purportedly helped over 8,000 migrants cross its border with the Spanish enclave of Ceuta by sea this week.

"It is an aggression of Spanish borders and of the borders of the European Union, and this, in international law is unacceptable", Margarita Robles said.

The minister further lambasted Rabat for allegedly "using" minors as young as seven and eight years old in order to reach its goal of putting pressure on Madrid. Robles stressed that such actions violate international law.

"It is not acceptable to put the lives of minors or of people of one's own country, at risk for reasons that I don't understand", the minister added.

Migrants coming from the Moroccan side of the border started to arrive in the small Spanish enclave, seen as a gateway to Europe, on 17 May, with 6,000 people entering Ceuta by swimming across the border. At least one minor nearly drowned during the attempt, but was rescued by a member of the Civil Guard protecting the border.

Some 2,000 more migrants arrived in Ceuta over the following two days, but the Spanish authorities have already started sending them back to Morocco – some 5,600 have already been returned to the kingdom. However, under Spanish law, unaccompanied minors may be allowed to stay in the country.

Moroccan Minister of State for Human Rights El Mustapha Ramid hinted on 18 May that the country may have relaxed its border controls with Ceuta in response to Madrid's decision to admit the leader of the Polisario Front, Brahim Ghali, for treatment for COVID-19. The Polisario Front is fighting against Morocco for the independence of Western Sahara, but some human rights groups have accused the militants of genocide and war crimes.

Spain said it allowed Ghali to be treated in the country for humanitarian reasons. However, the Polisario Front leader was served a summons by Spain's high court so that he could testify in a preliminary hearing on accusations of committing war crimes on 1 June.