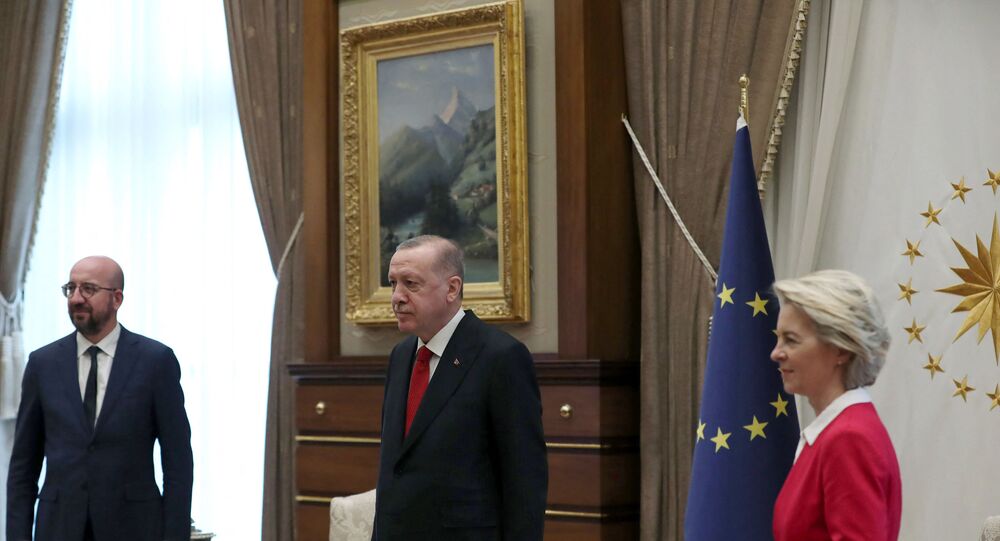 The so-called chair incident occurred when Turkish President Recep Tayyip Erdogan had a meeting with his European Council counterpart Charles Michel and European Commission President Ursula von der Leyen in Ankara on Tuesday. The two men occupied the two available chairs, leaving Von der Leyen with no alternative but to take sit on the sofa.

France's Europe Minister Clement Beaune has claimed that Turkey set a "trap" for European Commission President Ursula von der Leyen by prodding her to sit on a sofa rather than a chair during a recent high-level meeting in Ankara.

In an interview with German television channel RTL on Sunday, Beaune called the Turkish hosts’ failure to place a chair for Von der Leyen “an insult from Turkey”.

The minister argued that “Turkey behaved badly”, referring to the incident he described as "a Turkish problem done deliberately towards [the EU]”. According to Beaune, “[Brussels] shouldn't be stirring up guilt among Europeans”.

The remarks followed Turkish Foreign Minister Mevlut Cavusoglu’s condemnation of “unfair accusations against Turkey", which he said has "an ancient and civilised society" which is "no stranger to playing the part of a gracious host".

"The protocol applied in meetings in Turkey is the international protocol and has been carried out within the framework of internationally respected Turkish hospitality. Demands made by the EU were met. This means that the seating arrangement was made according to their suggestions. Our protocol units came together and their demands were met," Cavusoglu added.

The unfortunate incident - which has already been dubbed “sofagate” on social media - occurred on Tuesday, when European Council President Charles Michel and Von der Leyen arrived in Ankara to meet President Recep Tayyip Erdogan and saw that there were only two chairs placed in front of the Turkish and EU flags in a meeting room.

© REUTERS / JOHANNA GERON
Ursula von der Leyen Compares EU to a 'Tanker', Single Countries to 'Speedboat' Amid Jab Row With UK
The two men did not think twice before occupying the two chairs, and the European Commission president muttered "ahem" in apparent exasperation and then sat on the sofa a bit away from the two negotiators. Notably, she was sitting opposite Cavusoglu, who is considered beneath her in diplomatic order of precedence.

European Commission spokesman Eric Mamer was quick to react by stressing that Von der Leyen should have been treated "exactly in the same manner" as Michel and that she was "clearly surprised" about the chair incident.