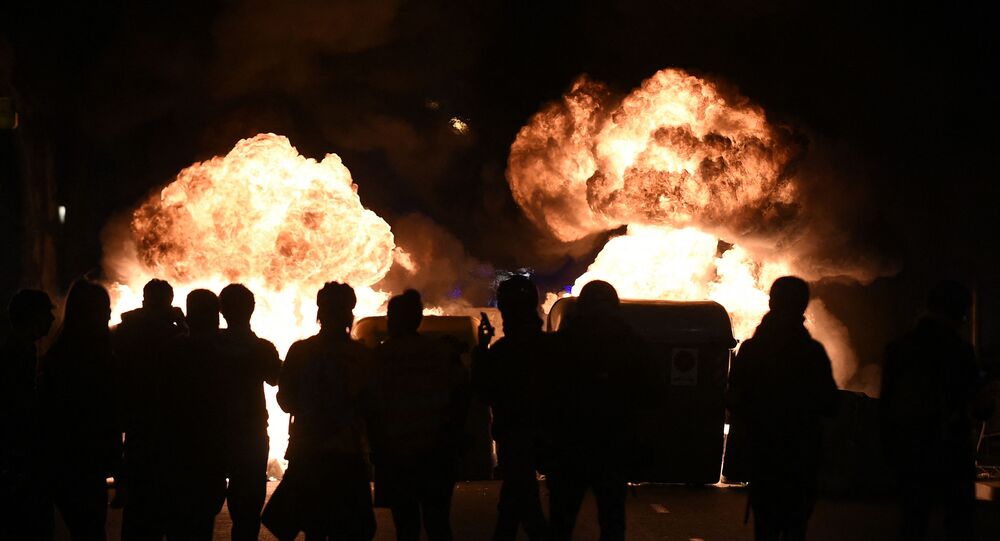 At Least 30 Reportedly Injured Amid Protests in Catalonia - Videos

Thousands of people gathered in some of the largest cities in Catalonia to protest against the imprisonment of Pablo Rivadulla Duro, aka Pablo Hasel, a Spanish rapper known for insulting the nation's monarchy. Hasel was arrested and convicted for "glorification of terrorism" and "slander against the crown" in his songs and posts on social media.

At least 14 people were detained during riots in a number of Spanish cities, as protesters went to streets demanding the immediate release of rapper Pablo Hasel on Tuesday evening, Catalan police said.

According to Catalan News, protests were held in Barcelona's Placa Lesseps, while other demonstrations took place in cities of Lleida, Girona, and Tarragona, as well in other large Spanish cities such as Madrid, Valencia, and Zaragoza. Two people were detained in Barcelona, ​​four - in Vic, eight - in Lleida, the Catalan law enforcement body Mossos d'Esquadra said via Twitter.

Rioters overturned and burned containers, mopeds, and pelted the police with various objects in a number of cities in the region. Law enforcement officers used batons and rubber bullets. Clashes with police also reportedly took place in Valencia.

Rioters were also seen in the city of Vic storming what appears to be a police station.

​32-year-old Hasel was arrested on Tuesday morning. Protesters reportedly say they took to the streets since it is a violation of their right for freedom of speech to be detained and sentenced for the content of one's lyrics and tweets.

In 2015, Hasel was sentenced to two years of probation for praising terrorism, but in 2018 he was sentenced again. The court ruled that 64 of his posts on Twitter and one song on YouTube contained statements glorifying terrorism and defaming the monarchy and state institutions.

The charges related to terrorism were brought in connection with references in rapper's lyrics to the GRAPO organization, which was included in the list of terrorist organizations in Spain, as well as in the EU and the US. Several dozen people were killed by the group, which was formed in 1975.

Eventually, Hasel was sentenced to nine months in prison. He was supposed to voluntarily arrive at the prison last Friday, but refused to do so and barricaded himself at the University of Lleida on Monday, along with nearly 50 supporters. Hundreds of famous cultural figures, including director Pedro Almodovar and actor Javier Bardem, have signed a letter in support of him.

The Spanish government last week announced plans to revise the punishment for crimes related to the freedom of speech so that it only applies to those who exhibit violent behavior or whose actions "clearly" pose a threat to public order.

Cyprus Police Use Tear Gas to Disperse Protest in Nicosia

Anti-Coup Protesters Take to the Streets of Yangon in Myanmar