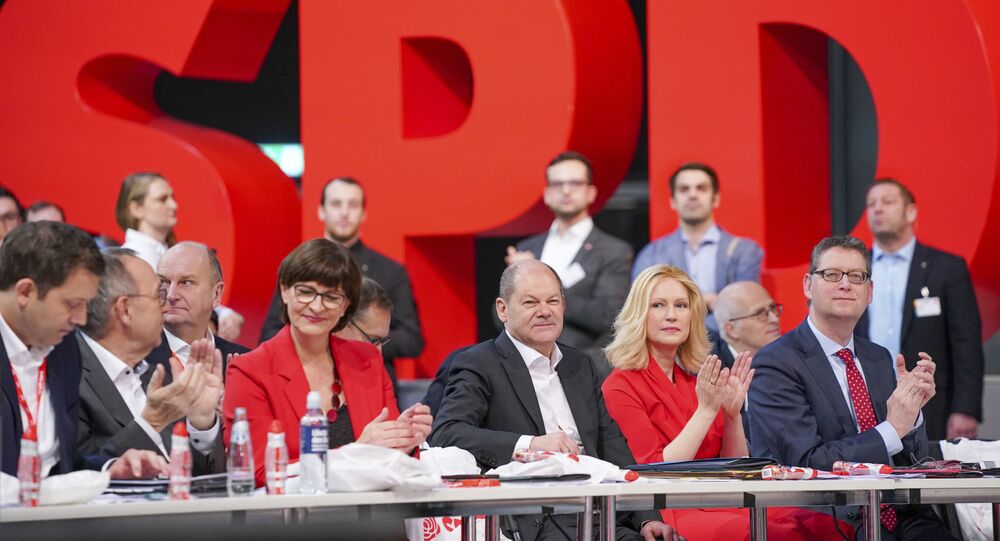 The SPD has repeatedly tried to benefit from the slow rollout of the coronavirus vaccination campaign in Germany, which the party said trails behind other countries like the US, the UK, and Israel.

Germany's Social Democratic Party (SPD) is making "a risky political play" by moving to turn against their partner in government, the Financial Times (FT) reports.

This alleged drive by the SPD, which is part of the "grand coalition" comprised of Chancellor Angela Merkel's Christian Democratic Union (CDU) and the Christian Social Union, comes amid growing frustration in Germany over European vaccine shortages and ahead of the country's federal elections.

The newspaper quoted Uwe Jun, a political scientist at the University of Trier in Germany, as saying that the SPD "is desperately looking for a way to build its own profile".

"But the probability that this will backfire for them is higher than the chance of profiting from it", Jun asserted.

The political scientist also referred to the Social Democrats' current push to capitalise on the slow rollout of COVID-19 vaccine jabs in Germany.

"I fail to see any strategy here. Being the opposition within the government is not a promising idea", Jun noted.

He was echoed by Ralf Stegner, a Social Democrat politician from Schleswig-Holstein, who recently told the newspaper Frankfurter Allgemeine Zeitung that there was "nothing to be won" from such "squabbling".

Paul Ziemiak, the CDU's general secretary, for his part, lashed out at the SPD over its attacks on the German government's COVID-19 vaccine rollout, saying that "anyone who engages in cheap election campaign manoeuvring and mood-mongering shows first and foremost that they lack the sense of responsibility and the attitude to govern this country well".

This comes as the SPD prepares for the September 2021 Bundestag elections, with some party leaders claiming that "loyalty in government has yet to work in their favour", according to FT.

The newspaper cited SPD lawmaker Jens Zimmermann as saying that he's been part of "the grand coalition" for seven years, "and for seven years we said we won't get credit for being critics of our own government".

"Yet for seven years, we've been in decline in the polls", Zimmermann added.

© AFP 2021 / ODD ANDERSEN
'Vote of No Confidence Against Merkel' – Only Chance for the SPD?
The SPD has seen its support almost halved from the 40.9% the party obtained in 1998 to just 20.5% in the last German federal election in 2017. The Social Democrats have lost four federal elections in a row, while in the 2019 European Parliament vote, the party occupied third place, gaining about 15.8%.

Over the past twelve years, the SPD has reportedly seen few benefits from being part of the "grand coalition", with the party's approval ratings increasing by 15% in 2020, versus the CDU's 35% within the same period.

Polls for this year's federal election, due in September, have suggested the SPD is struggling to remain the country's second largest party.

German SPD Leader: State of German Government is Not Acceptable