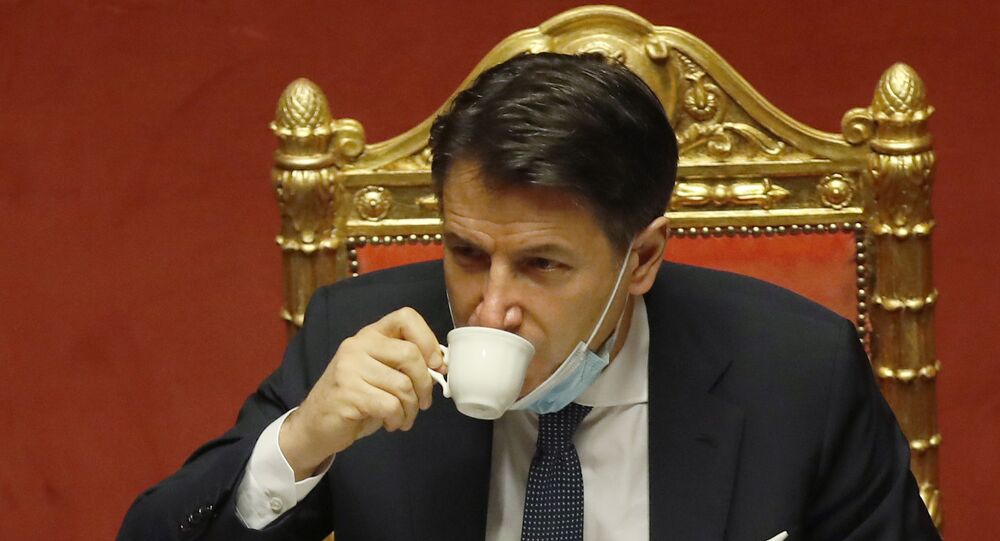 GENOA (Sputnik) - Italian Prime Minister Giuseppe Conte may resign in the coming days in order to try to form a new government with wider support after he failed to get an absolute majority at the vote of confidence in the Senate last week, La Repubblica daily reported Monday.

"My aim is an agreement that could give a clear political perspective to the government until the end of its term," La Repubblica daily quoted Conte as saying.

The government crisis played out last week after two ministers from Italia Viva party resigned from the cabinet in protest against the economic recovery plan, or National Recovery and Resilience Plan (PNRR), promoted by Conte and adopted. PNRR specifies how Italy is going to administer funds that it is going to receive from the European Union’s Next Generation EU instrument.

On Wednesday, Conte won the backing of the senate in the confidence vote with a slim margin. He received a simple majority of 156 votes, which is what the constitution technically requires, but failed to secure an absolute majority of 161 senators, which makes it difficult for him to actually govern and bring through the parliament certain legislative acts.

Since Wednesday, Conte has been looking for the support of a new parliamentary group collecting members of various centrist parties in order to reinforce his parliamentary support.

Bruno Tabacci, a member of the Chamber of Deputies from the mixed group, told La Repubblica that resignation was proposed to Conte as a possible way out form the current situation.

"I did what I could but the numbers remain uncertain and this country does not need a scraped parliamentary majority. I suggested a gesture of clarity to Conte: to resign in order to form a new government. And if it does not work out, we will have an early vote," he was quoted as saying.

© REUTERS / Andreas Solaro/Pool
What's Behind Political Crisis in Italy as PM Conte Faces Confidence Vote in Senate
The first real test for the current government is going to be on January 27, when the parliament will vote on the report by Minister of Justice Alfonso Bonafede on the state of justice in the country. Italia Viva has already announced it would vote against.

In case of inability to get approval for single legislative proposals, the prime minister still does not have a legal obligation to resign, Michele Ainis, constitutional law expert and professor of public law institutions at the University of Roma Tre, told Sputnik last week. However, at this moment a political and moral obligation may arise because of a de facto impossibility to govern.