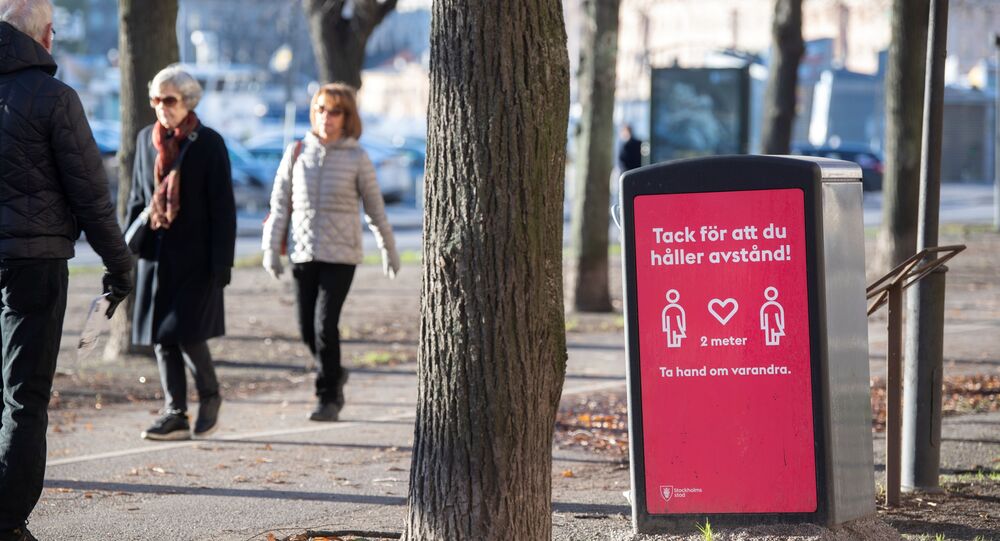 Over the past year, Anders Tegnell has become the figurehead of Sweden's standalone approach to combating the coronavirus – both revered and criticised. In a recent contentious opinion peace, he argued that many of the measures will remain relevant, yet the restrictions will be felt less and less, as people will eventually adapt.

Sweden's state epidemiologist Anders Tegnell has shared his thoughts on the outgoing and incoming year in a column for the newspaper Dagens Industri.

According to Tegnell, Sweden was hit hard because many brought the virus from abroad – not necessarily from China, but from different places. During February and March, close to one million Swedes travelled to foreign risk areas, such as Italy and Austria, Tegnell noted.

"In a short time, we had a spread throughout society. We then focused on limiting the spread of infection as much as possible. This succeeded relatively well, except in elder care", Tegnell argued.

The state epidemiologist singled out the spread of the coronavirus in nursing homes, where many residents were infected by their carers. The majority of the nearly 8,300 Swedes who have died so far from COVID-19 were over 70 years old, with half of them having lived in specialised housing. This, according to Tegnell, is the reason for Sweden's higher death toll than its neighbours.

According to Norwegian broadcaster NRK, Sweden's death rate is 817 per one million inhabitants, compared with only 77 in neighbouring Norway, which has recorded only 421 deaths. Sweden also stands out in terms of face mask usage, which is neither obligatory nor as widespread as in other parts of Europe.

At the same time, Tegnell was hesitant to make predictions for 2021.

"Most forecasts have proven to be incorrect. This virus continues to surprise us. Therefore, it is difficult, almost impossible, to predict how it will develop in 2021", Tegnell wrote.

He emphasised, however, that Swedes must learn to live with the coronavirus.

"COVID-19 is here to stay. Many of the measures introduced will probably also be relevant next year", Tegnell argued, suggesting the restrictions will be felt less and less as the population eventually learns to live with them.

Sweden has come under fierce internal and international criticism for its handling of the pandemic. It took the country a long time to introduce any measures, and unlike most European countries that shut down major parts of their societies, Sweden consistently shunned any lockdowns.

Professor Björn Olsen of the University of Uppsala, a staunch critic of the Swedish approach, who claimed that the Swedish authorities failed to understand the seriousness of the situation, reiterated his criticism, suggesting that the pandemic wasn't handled well enough, allowing a spread that could have been avoided.

Olsen stressed that it took far too long for Prime Minister Stefan Löfven to react. When the second wave of infections was on its way this summer, Löfven and Tegnell still believed in the since-debunked idea of herd immunity.

"It is a question of what kind of crystal ball they had, but I think it was quite murky. There were many who predicted that there would be an increased spread of infections", Olsen told national broadcaster SVT, slamming the expectation that the country would be less affected due to population immunity. "But we don't have that, it's only a few percent", Olsen said.

On social media, Swedes blasted Tegnell for wasting his time on writing opinion pieces and failure to mandate or at least recommend mask usage. Some went so far as to call him a "murderer".

"Anders Tegnell is not a fortune teller but an epidemiologist. Also, one must understand that a pandemic with a new virus is extremely unpredictable and is not like a weather forecast", a user growled.

​Earlier this month, King Carl XVI Gustaf, who is mostly a symbolic figure, made a rare statement, arguing that Sweden's response had "failed".

Despite criticism and controversy, Anders Tegnell retains a high level of confidence, 59 percent. It must be added though that this is a record low for the epidemiologist who at his peak enjoyed a rock star approval of 72 percent.