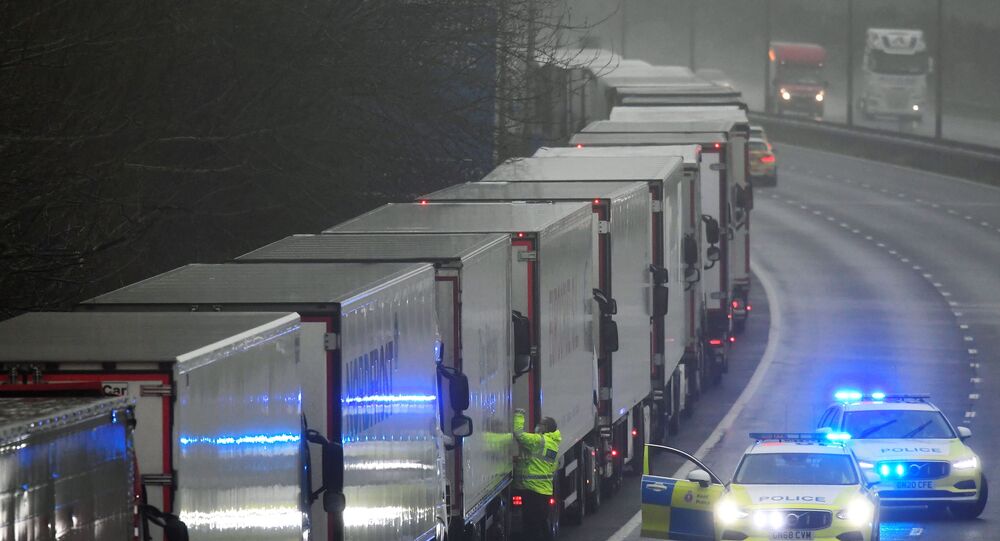 France shut its border to the UK out of concerns over a new and possibly more transmissible variant of the coronavirus that was detected in Britain last week. Paris' ban on freight traffic has resulted in lorries forming enormous queues at key ports.

France and the UK are set to reopen cross-border travel later on Wednesday following Paris' 48-hour blockade on the movement of people and freight across the English Channel in the wake of the discovery of a "mutant" coronavirus strain in Britain.

The resumption of traffic will come shorty after UK Transport Secretary Grant Shapps announced on Tuesday that Britain and France had agreed upon a protocol that "will see the French border reopen to those travelling for urgent reasons, provided they have a certified negative COVID test", while his French counterpart Jean-Baptiste Djebarri said that air travel, boats and Eurostar trains would "resume service as of tomorrow morning".

While British Prime Minister Boris Johnson has assured the public that supply chains were "strong and robust", and concerns were raised that the country could face shortages of food and medical supplies in the lead-up to Christmas if crossings to France were not reopened Wednesday.

© AFP 2020 / ADRIAN DENNIS
EU Calls For End to UK Travel Ban as Thousands of Trucks Stuck at Kent Border
While dozens of countries have temporarily banned travel from and to the UK due to the new strain, images showing long lines of lorries in key port cities have been making the rounds on social media. Despite the agreement that was reached between London and Paris, the queues built up around motorways could still take days to clear due to the operational challenges of providing the COVID tests and receiving results.

"It's very important hauliers don't rock up in Kent tonight, there's nowhere for you to go, it won't speed up your crossing of the Channel, stand by and await more instructions," Shapps said on Tuesday.

France made a snap decision to close its border to travellers from the UK on Sunday night, following concerns over the new coronavirus variant, which is believed to spread more easily.

Last week, the UK government announced that a mutated coronavirus strain that can be transmitted up to 70 percent faster has been actively spreading in London and the surrounding areas. The discovery of the mutation sparked panic in Europe, leading dozens of countries in the EU and beyond to freeze travel with the UK. Experts from the World Health Organisation (WHO) in Europe are expected to meet on Wednesday to discuss how to handle the outbreak, saying "limiting travel to contain spread is prudent until we have better info".