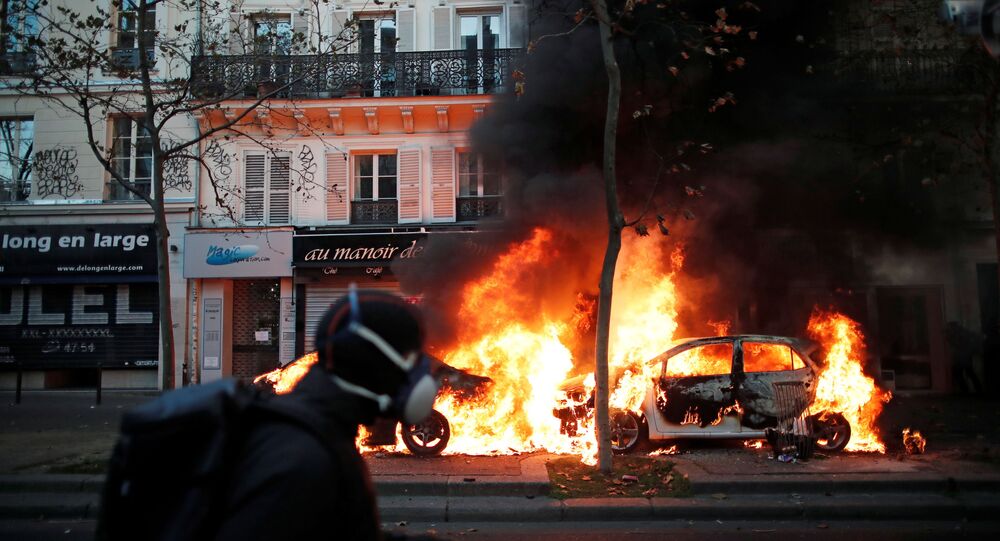 The new controversial legislation, passed at the French parliament's lower chamber on Tuesday, criminalises the display of images of law enforcement officers.

Rallies have continued into the night in Paris, France, as citizens have been protesting against the new "Security Bill" they believe to be a violation of the freedom of the press.

Radical participants of the protest were seen burning vehicles and trash cans and launching fireworks at officers, who were deployed to the scene of the rally in large numbers to restore order.

This is a not a small crowd by any means. Looks like it'll be a hot winter in Paris. pic.twitter.com/tc3recHRUb

Other footage on social media showed officers being violently beaten by protesters, with some of them reportedly losing consciousness.

Earlier in the day, police used tear gas and water cannons to disperse the protesters, who threw stones and launched fireworks at the officers.

Crowds in Paris and across France throw fireworks and stones while shining lasers at police to oppose #LoiSecuriteGlobale pic.twitter.com/aPl1woWusU

According to the latest update by the Paris Police Prefecture, at least 23 officers have suffered injuries amid the unrest, but given the intensity of the riots, that figure may grow further. Nationwide, at least 37 officers have sustained injuries, French Interior Minister Gerald Darmanin said.

The controversial legislation was passed by the French parliament's lower house on Tuesday, immediately sparking a broad public decry, especially among journalists. The bill entails one-year imprisonment and a fine of 45,000 euros ($54,000) in punishment for the distribution of images of police officers and gendarmes that could potentially lead to their physical and psychological harm.