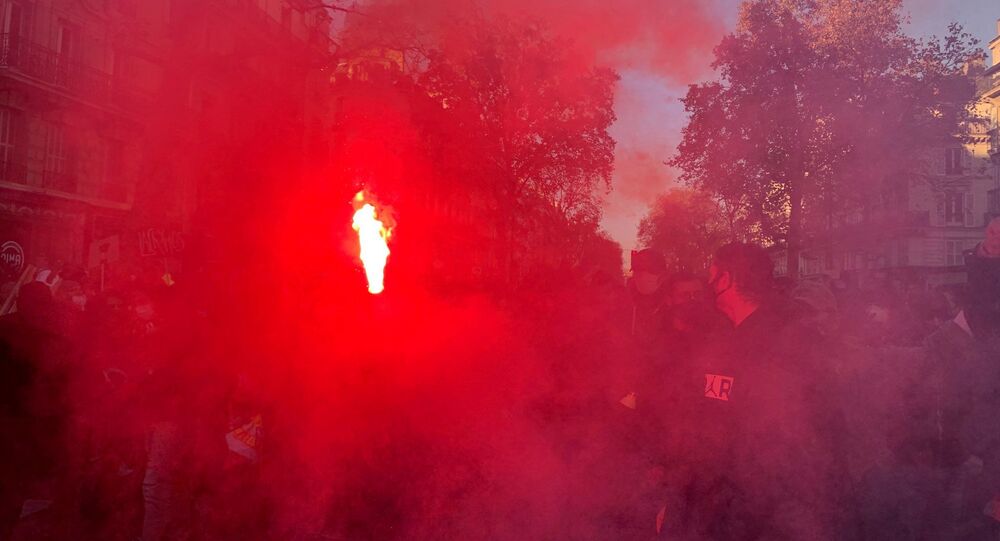 French parliament late on Tuesday passed a bill on global security, criminalising the publication of images of police officers online, despite the recent riots against the legislation being criticised for possibly infringing on the freedom of the press.

French police on Saturday deployed tear gas against demonstrators at a Paris rally against the 'Global Security' bill in France.

The protest, which started at 2pm local time near Place de la Republique, was later joined by demonstrators in black clothes. The demonstrators lit smoke grenades and threw things at the officers which prompted the police to act.

A Sputnik correspondent covering the protests has filmed the demonstrators launching the projectiles against the police.

At least two cars in addition to bicycles and trash cans were set on fire during the protest. The rioters were also spotted dismantling surveillance cameras, according to the correspondent.

​The protests against the security bill were amplified by anger over a video that recently circulated on social media in which French police officers were filmed beating a black music producer.

​Article 24 of the bill, which has come under especial criticism as it makes it illegal to distribute videos and photos identifying law enforcement officers and thereby violate their "physical or mental integrity," was approved by the parliament, against the backdrop of demonstrations over the past week.

​Critics of the legislation have said say it may hamper the functions of mass media to cover protests and inform the population, while also violating freedom of expression.

In turn, French Prime Minister Jean Castex said on Twitter that the government has never had any intention to undermine freedoms of press and expression, and added that he would refer the bill's controversial Article 24 to the country's Constitutional Court.