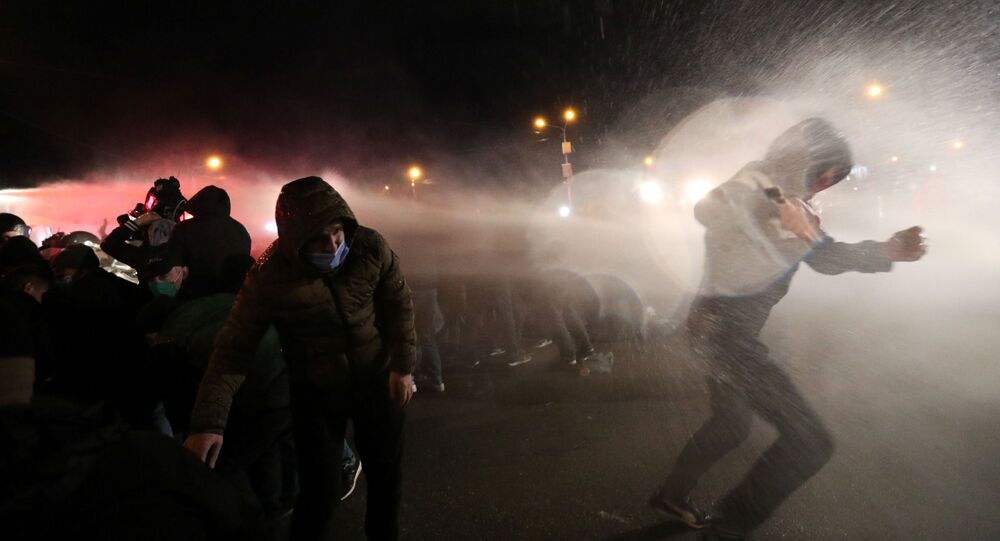 TBILISI (Sputnik) - Georgian police are dispersing an opposition protest in front of the Central Election Commission (CEC) building in the capital city of Tbilisi, but protesters are not planning to leave.

"Our activists are going to bring a few tents, we’ll spend the night here and, like we promised, we are not planning to disperse," one of the protesters told Sputnik around midnight on Sunday.

Georgia TV channels are showing drone footage of police trying to disperse the protesters with the use of water cannons.

According to a Sputnik correspondent, special police forces were seen at the Central Election Commission building, as well as their water cannons. Law enforcement officers are calling on protesters to leave and threatening to use force.

Meanwhile, Georgia’s Rustavi 2 TV reported in the early hours of Monday that most of the opposition protesters at the CEC building had left, after political leaders called on the demonstrators to wrap up their protest.

Earlier, a Sputnik correspondent reported that a massive protest by the Georgian opposition and their supporters was being held on Sunday outside the country's parliament in Tbilisi. The protesters later marched to the CEC building. The demonstrators said they refused to recognize the results of the recent general election and were demanding a new one.

According to a Sputnik correspondent, several demonstrators were injured when Georgian police used a water cannon to break up the crowd earlier on Sunday.

The Georgian Interior Ministry said in a statement on Sunday that law enforcement officers were justified in their response to the demonstrators, as protesters had tried to storm the CEC building and allegedly used brute force in defiance of a police order.

Georgia held a general election on 31 October, resulting in the ruling Georgian Dream party the winner. Altogether, seven political parties that crossed the one-percent threshold were eligible to enter the legislature. Following the announcement of the results, the country's opposition has been organizing protests, calling for another election.