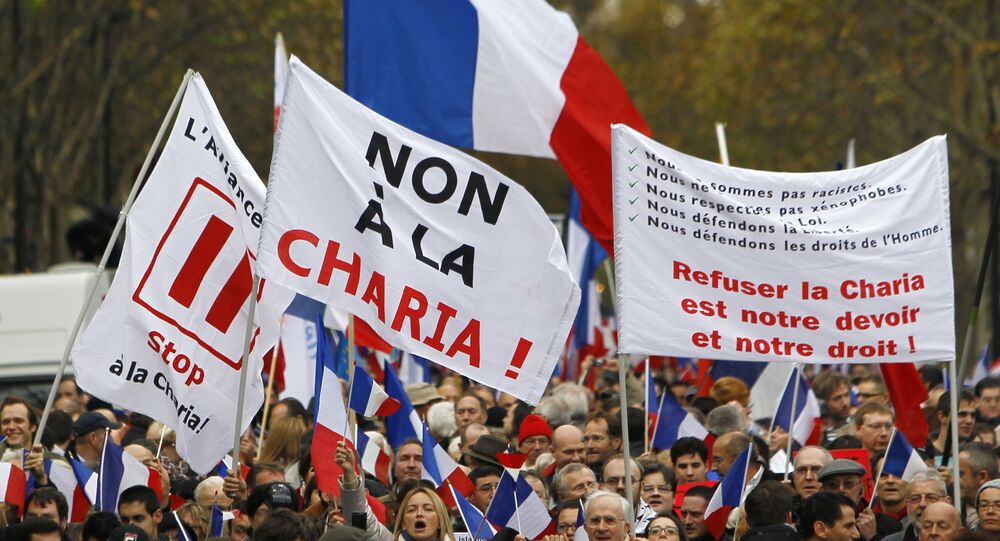 French President Emmanuel Macron stepped up efforts to combat Islamist ideology in recent weeks in the wake of a series of terrorist attacks across multiple several cities. This week, responding to criticism from a UK paper that his efforts might “stigmatise” France’s Muslim community, Macron stressed that his problem was with Islamism, not Islam.

Over half of French Muslims under the age of 25 believe that Sharia law is more important than French law, fresh polling by the French Institute of Public Opinion (IFOP) has found.

According to the institute, 57 per cent of its sample French Muslims under 25 put Sharia law above the laws of the French Republic, with the figure said to have risen by 10 percentage points from 47 per cent in 2016. By comparison, only 15 per cent of self-identified French Catholics believe the rules of their religion should come ahead of the state’s laws.

Young Muslims also appear to be more religious than French Muslims generally. When the latter were taken into account, only 38 per cent expressed support for the idea of the superiority of Sharia law.

Two-thirds, or 66 per cent, of French Muslims also expressed opposition to teachers showing caricatures of religious figures to their pupils, whereas 80 per cent of Catholics support teachers’ right to do so and 44 per cent of Muslims supported the prohibition of religious symbols in public educational institutions.

Only 34 per cent of Muslims supported the dissolution of the Collectif contre l’islamophobie en France (CCIF) and BarakaCity, an NGO and charity dissolved by presidential decree for its suspected proximity to radical Islamist and Salafist circles. Before its dissolution, BarakaCity formally described itself as a “humanitarian and charitable association based on Islamic values” assisting Muslims both in France and abroad. Of those polled, 76 per cent of the respondents expressed support for BarakaCity’s banning, with 65 per cent supporting the dissolution of the CCIF.

France is estimated to have about 5.7 million Muslims, who account for about 9 per cent of the country’s total population.

Commenting on the poll’s results, Jean-Pierre Sakoun, president of the Secular Republican Committee, an association promoting secularism in the French public debate, said the survey “confirms what we already knew, [that] the demand for a particular status with particular rights is progressing strongly among French Muslims, especially among young people who favour a communitarian model.”

According to Sakoun, the results show that French institutions, including schools, “are struggling to assert the qualities of secularism in terms of civil peace, collective freedom and individual emancipation.”

French authorities have launched a campaign against terrorism and “Islamist separatism” after last month’s series of Islamist terrorist attacks in Nice, Lyon and Paris, including the gruesome beheading of history teacher Samuel Paty by a radicalised teenager in Paris on 16 October, and a stabbing attack on 29 October at a church in Nice, southern France. Paty was killed outside the school where he taught after showing his pupils a cartoon the Prophet Muhammad, which he used as a teaching aid for a lesson on freedom of speech.

© REUTERS / Charles Platiau
Marine Le Pen Too Soft on Muslims in France, Says Departing Party Member
President Macron condemned Paty’s killing as a “typical Islamist terrorist attack” and an “attack on the French nation as a whole” and promised that the country would not flinch from its values of secularism and free speech.

On Thursday, Macron and Austrian Chancellor Sebastian Kurz discussed joining forces to combat radical Islamism in Europe, with Kurz, whose country suffered its own terrorist incident in Vienna on 2 November, expressing his support for “a European front in the war on Islamism".

Macron has been denounced in Muslim countries for his stance in the aftermath of October’s attacks, with Turkish President Recep Tayyip Erdogan blasting him as a ‘warmonger against Islam’ who should have his mental health checked for his “obsession” with Muslims. Turkey and other Muslim nations have also urged citizens to boycott French goods.

This week, the London-based newspaper The Financial Times accused Macron of creating a “hostile environment” for French Muslims and misinterpreted his condemnation of “Islamist separatism” as “Islamic separatism.” The error prompted Macron to send a letter to the editor, in which he emphasised that France’s fight was against fanaticism, violent extremism and “Islamist separatism, never Islam". The FT has since removed the offending article.