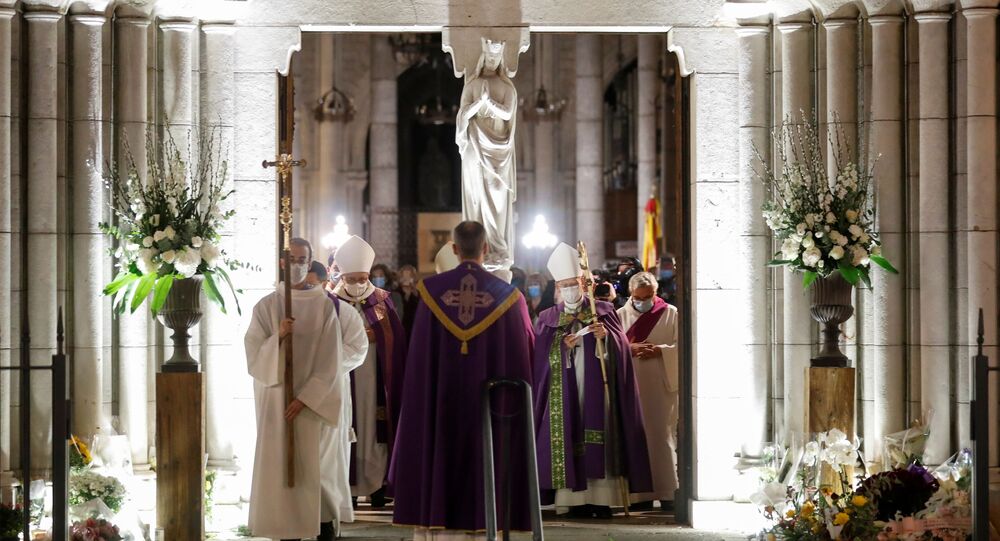 MOSCOW (Sputnik) - A Holy Mass dedicated to the three victims of the attack in the Basilica of Notre-Dame in Nice was held on All Saints' day.

The ceremony, broadcast by KTO Catholic television, lasted almost two hours on Sunday and was presided over by Bishop of Nice Andre Marceau. Relatives of the victims were present at the mass, which was open only to parishioners, as well as Nice Mayor Christian Estrosi.

This evening before the offering of the Holy Sacrifice of Mass in the Basilica of Notre-Dame in Nice, the first time since last Thursday’s Islamist terrorist attack, a Rite of Reparation was performed, as required by Canon law, after the murder of three people in the Basilica. pic.twitter.com/3KMPWke0OK

On 29 October, a 21-year-old man from Tunisia, later identified as Brahim Aoussaoui, killed three people with a knife in the Notre-Dame Basilica in Nice. The French government has designated it a terrorist attack.

The attacker was injured by police and is currently at a hospital in Nice. Estrosi said the man repeatedly shouted "Allahu Akbar" (God is great) during the attack. According to the French authorities, the attacker crossed into France from Italy at the start of October.

An anti-terrorism investigation is underway. A total of six people have reportedly been questioned on suspicion of being linked to the attacker.

Another attack occurred in France's Lyon this week. A Greek Orthodox priest, identified as 52-year-old Nikolaos Kakavelaki, was shot at and injured in the 7th district of Lyon near a Greek church on Saturday afternoon. He is now in serious condition at the hospital. The gunman fled the scene of the shooting and is likely still at large, as Lyon police have released the initial suspect in the attack.

The Lyon and Nice attacks occurred as France is experiencing national dismay in the wake of an increasing Islamic threat following the brutal murder of French history teacher Samuel Paty by a radicalised teenager in mid-October.