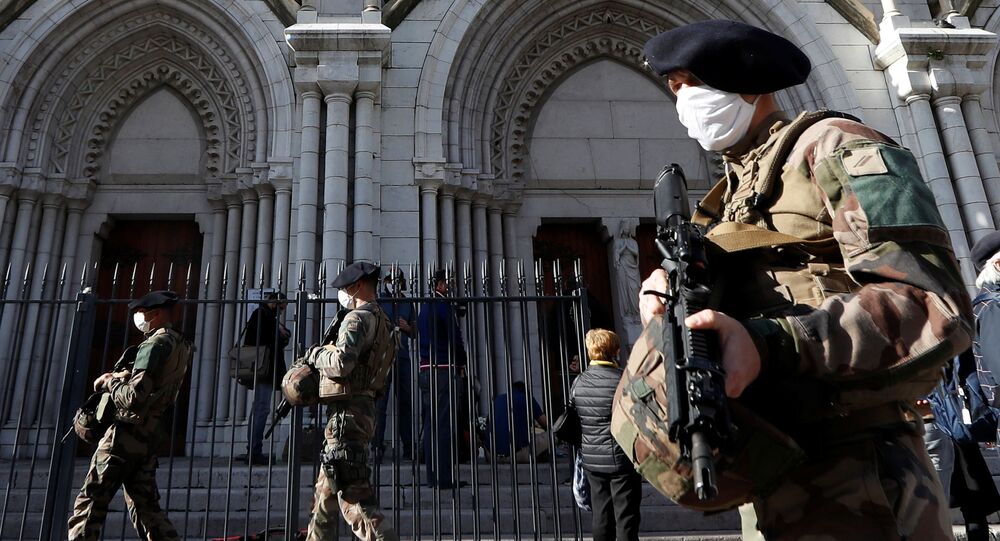 The recent attack on the Notre-Dame de Nice basilica that left three people dead came two weeks after another high-profile murder in France in which an 18-year-old Muslim killed a middle school teacher purportedly over him showing cartoons of the prophet Muhammad to pupils. President Macron called the tragic event an "attack" on France.

French Minister of the Interior, Gérald Darmanin, has alleged in an interview with Voix du Nord newspaper that the attacker on Notre-Dame de Nice, a 21-year-old man of Tunisian origin, arrived in the country already bearing plans to murder its citizens in his head. Darmanin admitted that the counterterrorism prosecutor is yet to determine when exactly the perpetrator, Brahim Aouissaoui, procured the plan of attack, but, at the same time, the minister noted that his actions suggest he planned the assault from the start.

"He obviously came there to kill. How else one would explain why he armed himself with several knives having just arrived [in France]. He obviously did not come to get papers", Darmanin said.

The minister went on to notice that the profile of terrorists operating in France has changed in recent years. He noted that apart from some exceptions, they are no longer prisoners radicalised during their incarceration or fighters sent from abroad. He noted that it forces Paris to adapt and look not only at radicalised persons, which is why the government is planning to adopt a new law in December.

© REUTERS / al-Aouissaoui family/Handout
A picture of Brahim al-Aouissaoui, who is suspected by French police and Tunisian security officials of carrying out Thursday's attack in Nice, is seen in this undated photo provided by his family on October 30, 2020

Darmanin also added that France is planning on strengthening its border controls, but noted that it is not going to treat every foreigner as a potential terrorist.

The minister's statement comes in light of the fact that the Nice attacker, who killed two worshippers, practically beheading one of them, and a sacristan on 29 October, arrived in the country via the Italian island of Lampedusa. He is currently being held at the hospital after being shot by responding police officers. According to reports, he kept saying "Allahu Akbar" as he was apprehended by the police.

The Nice attack happened just two weeks after another high-profile assault. Middle school teacher Samuel Paty was beheaded on 16 October by 18-year-old Muslim, Abdullah Anzorov, who had been living in France for a long time. Ahead of the beheading, Paty showed his students in a class on freedom of speech several Charlie Hebdo cartoons depicting the prophet Muhammad – something that is deemed blasphemous in Islam.

The French president called the two incidents an "attack" on France over its values and vowed not to "give in" to terror no matter what. The authorities have raised its counterterrorism plan Vigipirate to the highest level of "an urgent emergency throughout the country" and boosted security at educational facilities and places of worship.