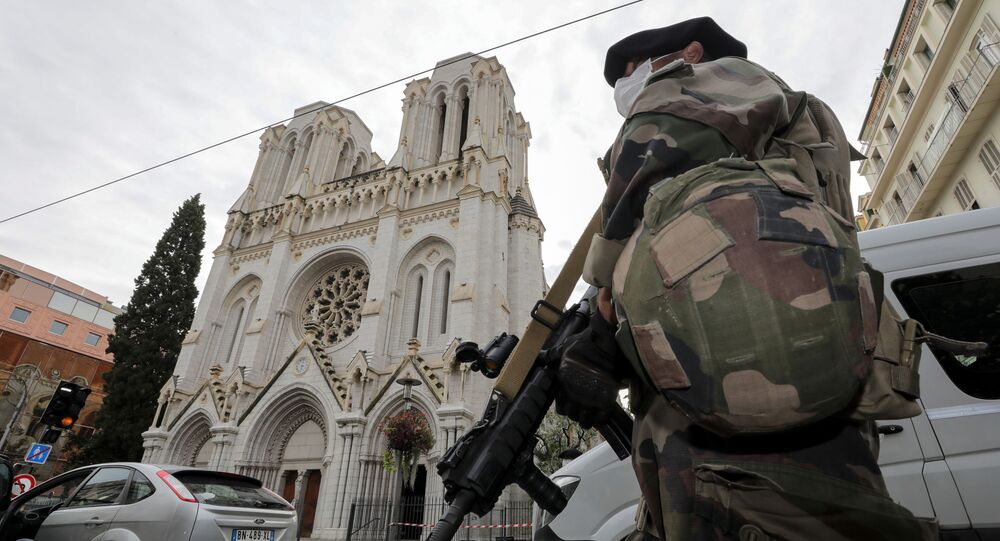 On Thursday, French President Emmanuel Macron said that the country is "under terrorist attack again", in a statement that came hours after a stabbing in Nice claimed the lives of three people.

French Interior Minister Gerald Darmanin has told the Berlin-based station RTL Radio that he does not rule out more terrorist attacks on French territory as the country is engaged in a "war against Islamist ideology".

"We are in a war against an enemy that is both inside and outside. We need to understand that there have been and there will be other events such as these terrible attacks", Darmanin said.

The remarks followed President Emmanuel Macron stressing on Thursday that France was "under terrorist attack again" after a fatal stabbing in Nice.

He told reporters that the country was attacked because of "our values […] of freedom and our desire not to yield to terror", and that France "will not give up on our values" because of an "Islamist terrorist attack".

Macron also announced that France will now step up the deployment of soldiers to protect key sites in the country, including schools and places of worship. The number of soldiers will now be more than doubled from 3,000 to 7,000, the president added, in what came as France raised its national security alert system to the highest, "attack emergency" level.

Macron spoke after at least three people were killed in a terrorist attack at and near Notre Dame Basilica, located on Nice's Avenue Jean Medecin earlier on Thursday.

One of the victims was said to have been beheaded in the assault that was carried out by a knife-wielding man, who was later detained by police and is now believed to be in hospital. During the attack, he was reportedly heard shouting "Allahu Akbar".

© REUTERS / ERIC GAILLARD
Nice Attack: Terrorism Won't be Thwarted Until International Community Come Together, Observers Say
French anti-terrorism prosecutor Jean-Francois Ricard, for his part, confirmed that the 21-year-old attacker was originally from Tunisia and had arrived in France on 9 October. Ricard added that the man was not previously known to the country’s intelligence services.

The Nice attack was followed by police reportedly killing an armed man in Montfavet, near the French city of Avignon, after he was also heard crying "Allahu Akbar" while waving a gun.

The attacks came less than two weeks after the death of Paris teacher Samuel Paty, who was beheaded by an attacker on 16 October after showing Charlie Hebdo's caricatures of the Prophet Muhammad in one of his classes on freedom of speech, something that is typically considered blasphemous by Muslims.