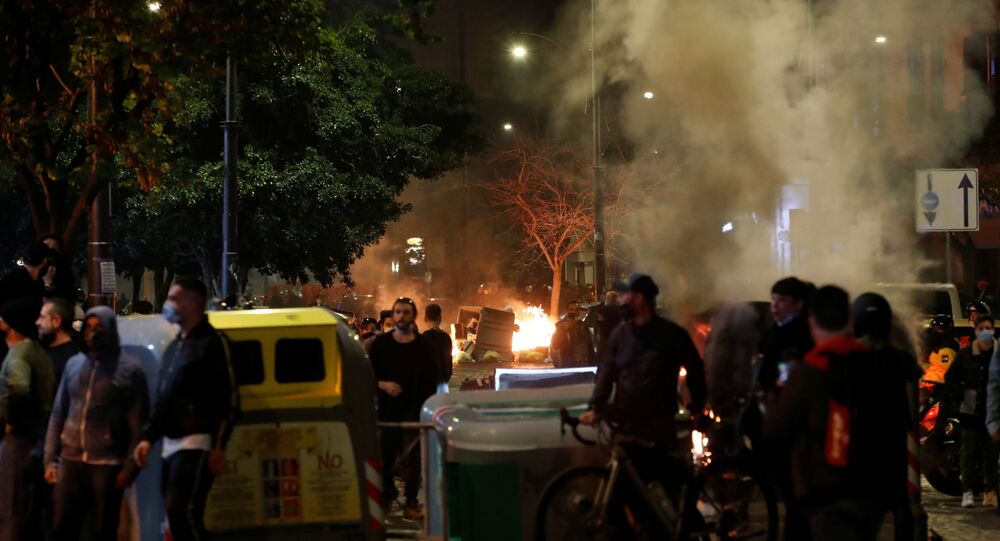 The southern region of Campania has seen a string of new restrictions aimed at curbing the galloping coronavirus, with newly announced curfew hours among them.

Demonstrators have taken to the streets of the southern Italian city of Naples, defying the newly announced curfew and attacking police vehicles in protests against the governor's call for a new lockdown due to a new record in daily COVID-19 cases.

As follows from multiple videos and snapshots of the violent scenes uploaded online, the enraged rioters shouted "freedom" as they marched through the city streets on Friday night, hurling bottles and smoke bombs.

Some could be seen erecting barricades and quite a few - clashing with police and attacking police cars. Officers at times had to resort to tear gas as they moved to disperse the angry crowds.

Big anti-regional government #COVID19 restrictions protests are happening right now in #Naples , #Italy. The situation seems to be out of control, thousands of people in the streets fighting with police, also stormed the regional government offices. #Napoli #protest #coronavirus pic.twitter.com/q7bY12QB5c

The protests came in response to a nighttime curfew imposed by the regional governor that took effect starting on Friday. Residents of the southern Campania region, in Naples and Salerno among other locations, are required to stay home from 11 p.m. to 5 a.m. until 13 November.

The media can hide this all they want. It's not a "lunatic fringe". It's thousands protesting to get their lives back. Well done Naples. pic.twitter.com/4UbX9yBBth

Governor Vincenzo De Luca on Friday announced that an "immediate" lockdown for up to 40 days was vital to stop the further spread of the coronavirus, with the first corona wave having rendered Italy one of the hardest-hit countries in the world.

"The current data on the infection rate suggests that any type of partial measures is ineffective", he said, explaining that it would be of paramount importance to close down "everything", except businesses providing essential services, as well as to prevent the virus spreading between separate regions.

"I don't want to see a motorcade of trucks filled with coffins", De Luca said, in an apparent reference to the chilling pictures of strings of trucks transporting coffins out of the northern Italian town of Bergamo back in March, at the height of the epidemic in the country.

On Wednesday, Prime Minister Giuseppe Conte urged Italians to opt for "small sacrifices" to curb the virus, such as skipping unnecessary travel. Italy reported 19,143 new coronavirus cases on Friday - a new daily record average, up significantly from the 16,079 cases reported on Thursday.