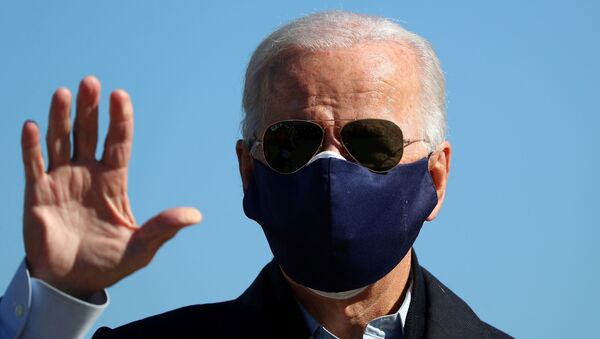 Oleg Burunov
All materialsWrite to the author
The US continues to lead the world in both the number of COVID-19 cases and virus-related fatalities, which stand at almost 8.5 million and 224,000, respectively, according to Johns Hopkins University.

On Friday, Democratic presidential nominee Joe Biden mocked President Donald Trump's efforts to handle the coronavirus pandemic by sharing a link to the website TrumpCovidPlan.com that was earlier launched by the former vice president's election campaign.

The website's URL leads to what appears to be a broken page with the error message that reads "Not Found. The Trump plan to defeat the coronavirus and reopen safely does not exist".

After eight months of this pandemic, we finally found President Trump's plan to beat COVID-19. https://t.co/KO4g328Uvr

The "learn more" button contains quotes and tweets by POTUS, in which the US president, said that the pandemic is "totally under control" and "will disappear".

At the bottom of the page, there is a link to Biden's campaign website and the Democratic nominee's "national plan to defeat COVID-19".

The developments came as the former vice president delivered a coronavirus-related speech in Wilmington, Delaware after he attacked Trump's handling of the epidemic during the second and final presidential debate in Nashville on 22 October.

In the Nashville debate, Trump responded to Biden's criticism by insisting that "we're rounding the corner" and that the country was "learning to live with" the virus. According to POTUS, "we can't close up our nation [due to COVID-19] or we won't have one".

The debate was preceded by their separate town halls last week, during which Trump, for his part, blamed several US governors for imposing "unconstitutional" state-wide lockdowns amid the pandemic.

When asked about the issue of finally reaching an agreement on the next coronavirus relief-package, the president said it was a negotiation process, which has, according to him, been jeopardised by House Speaker Nancy Pelosi.

"The Republicans want to approve a stimulus. She doesn't want to do it because she thinks it's bad for her election", the president pointed out.

'It Looks Like I'm Immune': Trump Says He No Longer Has COVID-19
The Trump administration has been involved in several measures to tackle COVID-19, including the creation of the White House coronavirus task force and Operation Warp Speed, which aims to swiftly develop medications and vaccines against the virus.

The US remains the world's hardest-hit country in terms of the coronavirus. It has already claimed the lives of at least 224,000 Americans, according to Johns Hopkins University's latest estimates.