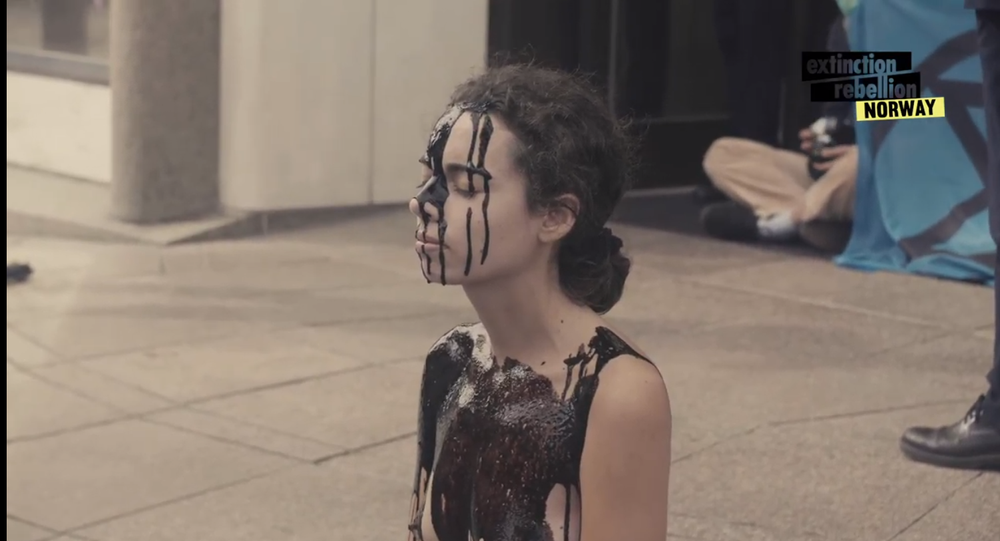 Norway is one of the world's leading energy exporters, covering about 2 percent of global oil demand and 3 percent of global demand for natural gas. It has come under increasing pressure from ecoactivists to stop oil and gas exploration, which has allowed the country to build the world’s biggest sovereign wealth fund, worth over $1 trillion.

40 environmental activists representing the notorious organisation Extinction Rebellion have been arrested after a series of protests against Norway's oil branch and the government's perceived failure to properly address the climate crisis.

The backdrop to the protests is that the company Wintershall DEA, which is active on Norway’s continental shelf, announced that it was leasing a drilling rig from the Norwegian company Odfjell Drilling for more oil exploration in the Norwegian Sea and the northern portion of the North Sea.

In a series of demonstrations, the protesters blocked a busy intersection at the top of Karl Johan Street, one of Oslo's main arteries, and later gathered outside two government ministries, holding banners reading “The Oil Age is Over” and demanding a “green restart” in a bid to drive Norway away from fossil fuels. The activists wrote “plus four degrees” with an exclamation mark on one of the windows of the Energy Ministry.

Members of @extinctionr_no outside of the Norwegian government department of oil and energy today: https://t.co/2jmGk0SmTW pic.twitter.com/Vm5vZTL09c

In yet another demonstration, activists gathered outside the Trade and Fisheries Ministry, dressed up in fish costumes and gluing their hands to the wall. According to police operations leader Vidar Pedersen, they demanded that the government acknowledge “global warming and the destruction of the biosphere”.

​The activists later chained themselves together and put up no resistance when police attempted to remove them. However, one of the focal points of the demonstration was a topless kneeling young woman who was doused with a thick black substance resembling oil by a fellow demonstrator wearing a suit.

“I want to show the vulnerability of mankind by being naked. We are vulnerable to the climate crisis we are facing,” 31-year-old Sara van der Moer told national broadcaster NRK. According to her, petitions don't work, so she decided to use her body as a more powerful symbol.

​One of the demonstrators, Dag Kolstø, explained their message in simple terms.

“Enough’s enough. The government has to stop the oil industry. We will continue to create disturbances until they have stopped the oil industry,” Kolstø told national broadcaster NRK.

The standoff between the ecoactivists and the fossil fuel industry has long been a heated one in Norway, where oil and gas are the most important commodities in the Norwegian economy, accounting for half of the total export value. A popular counterargument to the activists' calls to dismantle it is therefore that without the oil industry, Norway’s economy will not be able to provide much of a future for its residents.

Stefan Heggelund, an MP for the ruling Conservative Party, called the protesters a “spoiled mob”, arguing that they do the climate movement more harm than good.

“You don’t win much sympathy for the climate with this,” Heggelund told NRK.

Norway is one of the world's leading exporters of energy resources, covering about 2 percent of the global oil demand and 3 percent of the natural gas demand. Nearly all oil and gas produced on the Norwegian shelf is exported. Norway's natural resources have allowed it to build the world’s biggest sovereign wealth fund, worth over $1 trillion.

Extinction Rebellion (sometimes abbreviated as XR) is a global environmental organisation largely modelled after Greenpeace and other movements resorting to nonviolent civil disobedience. Its stated goal is to compel government action to avoid man-made biological collapse. Founded in 2018 in the UK, it has since spread across much of the Western world.

However, it is not without controversy, as XR has often been branded as “privileged”, “middle-class” and "overwhelmingly white”. Furthermore, it has been labelled an extremist organisation seeking to break down democracy and rule of law under the pretext of fighting for the environment.