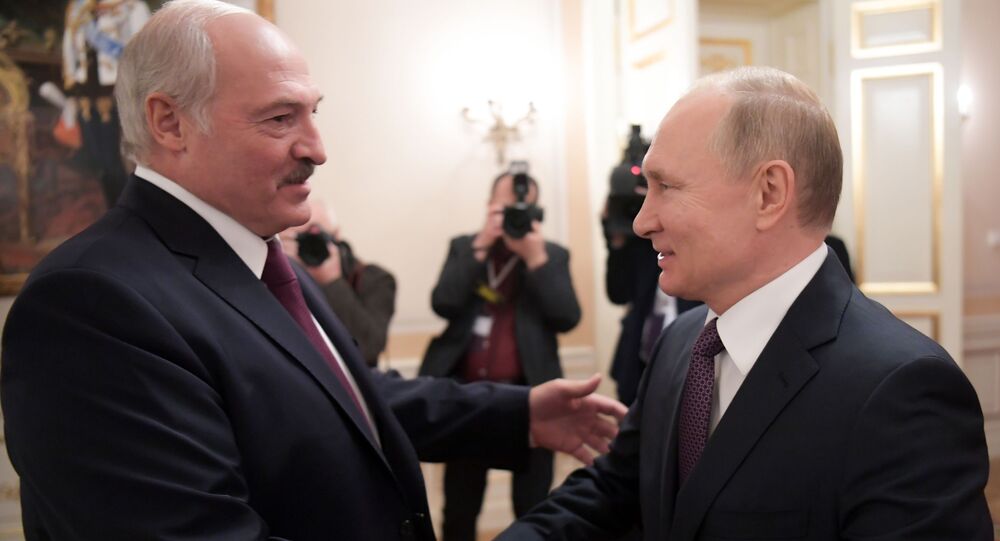 Over 6,700 people have been detained in Belarus in the wake of protests after the 9 August presidential vote, won by incumbent Alexander Lukashenko. Hundreds have been hurt in clashes with the security forces, including over 150 officers, prompting the government to order the personnel to stand down.

Russian President Vladimir Putin and his Belarusian counterpart Alexander Lukashenko have agreed to hold a meeting in Moscow in the coming weeks, the Kremlin said.

However, no exact date has been set for the meeting yet, Kremlin spokesman Dmitry Peskov told reporters. The Kremlin said that the leaders had reiterated their commitment to further boost bilateral cooperation in all areas, as well as to strengthen the Russian-Belarusian alliance.

The statement comes after a phone conversation between the two presidents, as they discussed the situation in Belarus as well as other issues on their agenda.

© REUTERS / Sergei Chirikov
Lukashenko: Belarus, Russia Could Unite Troops in Case of Threat on Western Border
Opposition protests swept across Belarus following the presidential election on 9 August, which saw incumbent Alexander Lukashenko re-elected for a sixth term. While electoral authorities maintain that Lukashenko collected over 80 percent of the vote, the opposition insists that his key contender, Svetlana Tikhanovskaya, won the election. Opposition figures also accuse the security forces of resorting to excessive violence during the protests.

The early days of the demonstrations were marked by police violence, but law enforcement officers have since reduced their use of force. Over 6,700 people have been detained, and hundreds have been injured, including more than 150 police officers. According to the Belarusian Interior Ministry, three people have died during the protests.