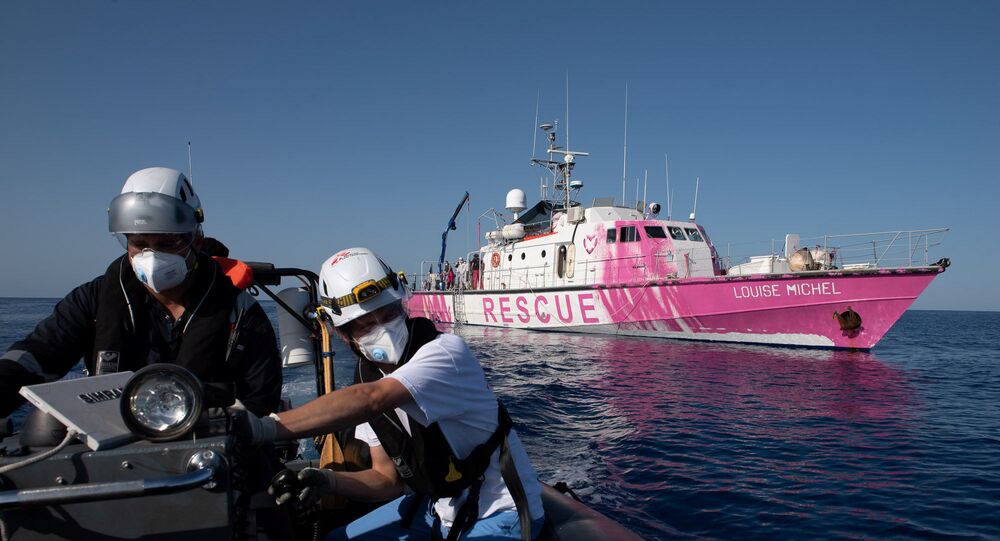 MOSCOW (Sputnik) - UK street artist Banksy, in a video published on Saturday, said EU members states deliberately ignored emergency calls from non-Europeans after a rescue boat sponsored by him was stranded at sea for hours with 219 migrants on board.

"Like most people who make it in the art world, I bought a yacht to cruise the Med. It’s a French Navy vessel we converted into a lifeboat because EU authorities deliberately ignore distress calls from non-Europeans", the artist said in a caption accompanying the video published on Instagram, continuing with "All Black Lives Matter" affirmation.

Earlier in the day, the Louise Michel boat asked the European Union for urgent assistance, but its calls had been ignored. After six hours of non-assistance, the vessel repeated its distress call, adding that 33 people were still on a boat's liferaft and the vessel could not move safely.

In a couple of hours, the crew tweeted that the Italian Coastguard took over 49 of the most vulnerable survivors, adding that a vessel of Germany's Sea Watch non-governmental organization also arrived at the scene.

Europe has been experiencing a migration crisis since 2015 due to the influx of thousands of migrants and refugees fleeing crises in their home countries in the Middle East and North Africa. The migrants are trying to reach EU states using various routes, primarily via Italy, Greece, Turkey and the Balkans. Many of them die in shipwrecks in the Mediterranean Sea.