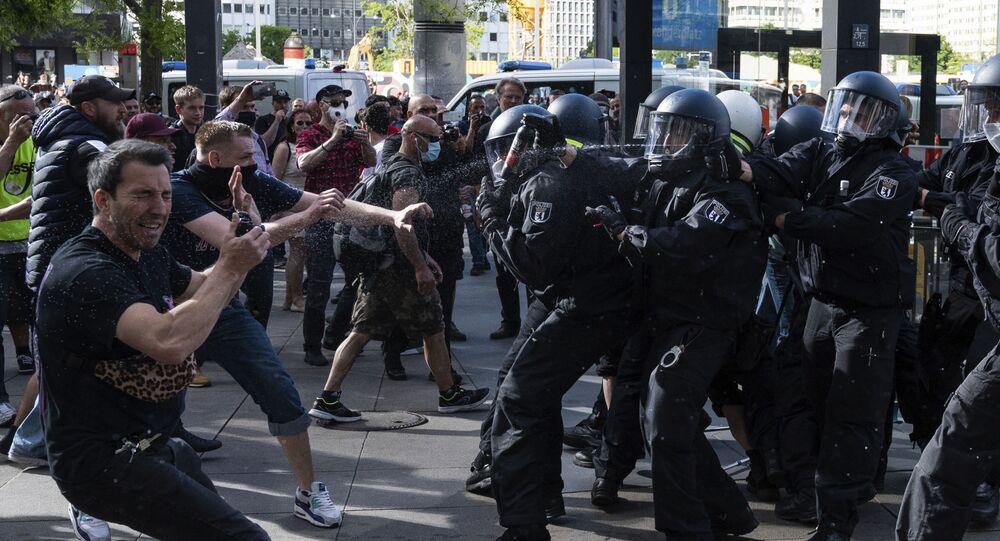 The interior minister of North Rhine-Westphalia, the German state second-worst hit by the pandemic, in turn, spoke of "wolves in sheep's clothing", who have allegedly infiltrated the protests against the quarantine measures.

Head of the German Federal Office for the Protection of the Constitution (BfV) Thomas Haldenwang has warned in an interview with the newspaper Welt am Sonntag that "extremists, especially right-wing ones" have been trying to use the protests against the anti-coronavirus lockdown measures to gain supporters for their goals, which are allegedly aimed at bringing down government institutions.

"There is a risk that right-wing extremists will use their images of the enemy and goals aimed at destroying the state to lead the Corona demonstrations, which are currently being carried out by citizens who do not violate the provisions of the German constitution", the head of the domestic security agency said.

Haldenwang claimed that "extremists" have been actively encouraging their members to participate in the rallies against the quarantine, allegedly seeking to "exploit" the protests in order to "connect" with ordinary citizens. His claims have found support with North Rhine-Westphalia's Interior Minister Herbert Reul, who warned that "wolves in sheep's clothing" are "sneaking" into these protests trying to appeal to ordinary citizens with their "anti-democratic slogans".

The head of the BfV, in turn, noted that extremist groups have resorted to these methods in the past, namely during the demonstrations against Berlin's new immigration policy that was implemented in 2015.

Back then German, citizens rallied in cities across the country to protest against Chancellor Angela Merkel's immigration policy. The new approach to immigration led to a major influx of migrants from the Middle East, which was followed by a spike in crime rates across Germany. Many of these crimes, ranging from sexual harassment to murder, were attributed to the migrants, who entered the country under the new policy and were difficult to keep track of.