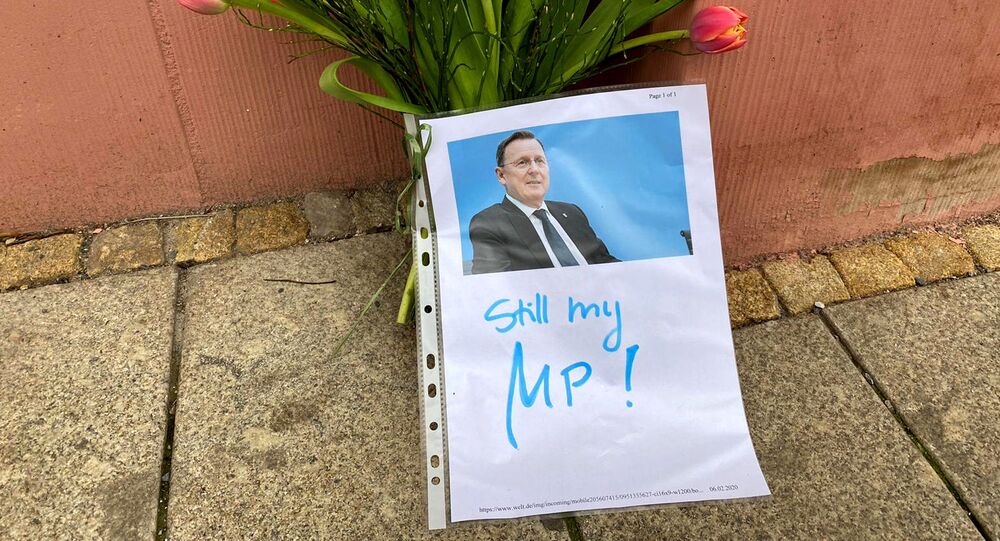 Earlier this month, a political crisis emerged in German's Thuringia state after Thomas Kemmerich of the Free Democrats (FDP) party overcame incumbent The Left party candidate Bodo Ramelow in a narrow 45 to 44 vote to become the state's premier, after gaining support from the right-wing AfD.

Protesters gathered on Saturday at Erfurt’s Cathedral in the German state of Thuringia under the slogan “Not with us!” to rally against a recent vote to elect the leader of the region, which brought together Christian Democratic Union (CDU) legislators with the Free Democratic Party (FDP) and Alternative for Germany (AfD).

Mike Mohring, head of the Thuringia chapter of the Christian Democrats (CDU), had allowed CDU lawmakers to vote for FDP candidate Thomas Kemmerich despite him also having AfD support.

The AfD had sided with the pro-business FDP's candidate to beat Bodo Ramelow of 'The Left' party during the premiership elections in Thuringia, thus breaking the post-war consensus among the established parties to sideline right-wing candidates.

Following the scandalous vote, Mike Mohring, the head of the CDU in Thuringia, announced that he would resign after German Chancellor Angela Merkel and CDU party head Annegret Kramp-Karrenbauer slammed the development.

More surprisingly, Kramp-Karrenbauer, who had been tapped as Merkel's successor as national CDU leader, stood down "amid accusations of a lack of authority in imposing a party line", according to Deutsche Welle. The backlash caused Kemmerich himself to stand down after just three days.