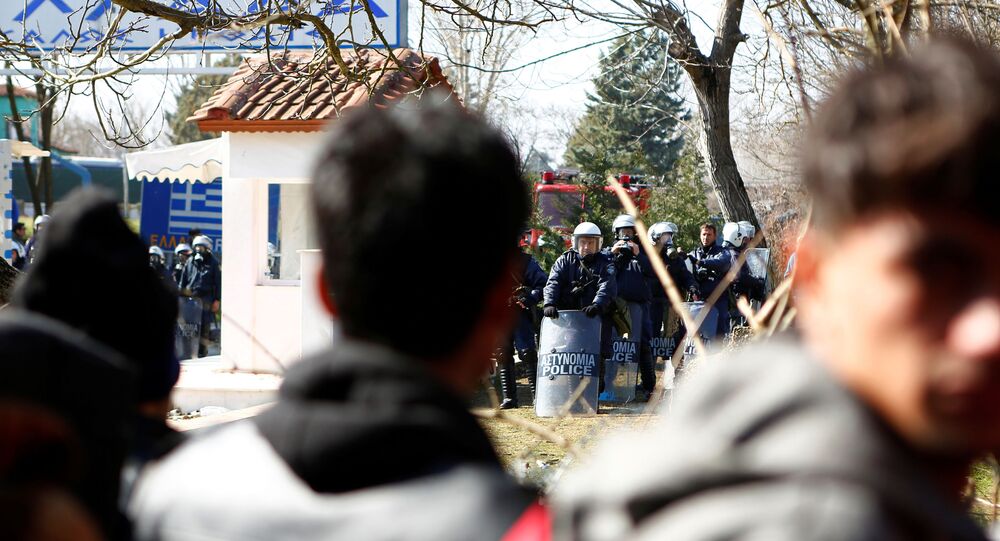 BRUSSELS (Sputnik) - Dimitrios Papadimoulis, vice president of the European Parliament and the head of the delegation from Greece's leftist Syriza political party, on Wednesday accused Turkish President Recep Tayyip Erdogan of using the ongoing migrant crisis at the Greece-Turkey border to blackmail the European Union.

"President Erdogan has a very specific agenda and is clearly trying to blackmail Europe. And he is using people to do it. Such acts require a quick and responsible EU response and effective sanctions. President Erdogan trespasses unilaterally the EU-Turkey agreement on his sole responsibility", Papadimoulis said.

When asked if the massive influx of migrants and refugees was caused by the situation in Idlib, the senior European lawmaker answered negatively.

"There is no doubt that increased tensions lead to sharp increases in refugee/migration flows. But this is definitely not the case here. Ergodan deliberately violates the EU-Turkey agreement and uses migrants as a human weapon in order to blackmail the EU in an inhuman attempt to succeed his not that secret agenda", he said.

He also responded to the accusations made by Turkish Foreign Minister Mevlut Cavusoglu about Greece using teargas against the migrants.

"It is clearly a part of the Turkish Government’s internal propaganda. Erdogan is rushing unfortunate people towards the Greek-Turkish borders and not towards the Bulgarian-Turkish borders. Can Mr Cavusoglu explain why is that?" he stated.

Last week, Turkey announced it would not be able to stem the flow of migrants and refugees following the recent increase in tensions in the Syrian province of Idlib, thus opening its border with the European Union to those wishing to cross it. Thousands of migrants immediately rushed to the border with Greece and Bulgaria trying to get into Europe.

© REUTERS / UMIT BEKTAS
Refugees Gather Near Turkey-Greece Border - Video
Per the 2016 agreement between Turkey and the EU, Ankara promised to stem the flow of migrants into the bloc, with Brussels pledging to provide funds to help Turkey care for the refugees. Turkish President Recep Tayyip Erdogan has made his dissatisfaction with the arrangement well-known on multiple occasions, saying that the EU has not been not doing enough to assist in the matter.
...
Reddit
Google+
Blogger
Pinterest
StumbleUpon
Telegram
WhatsApp
60
Tags:
crisis, migrant, Turkey, Greece, European Union (EU)
Community standardsDiscussion