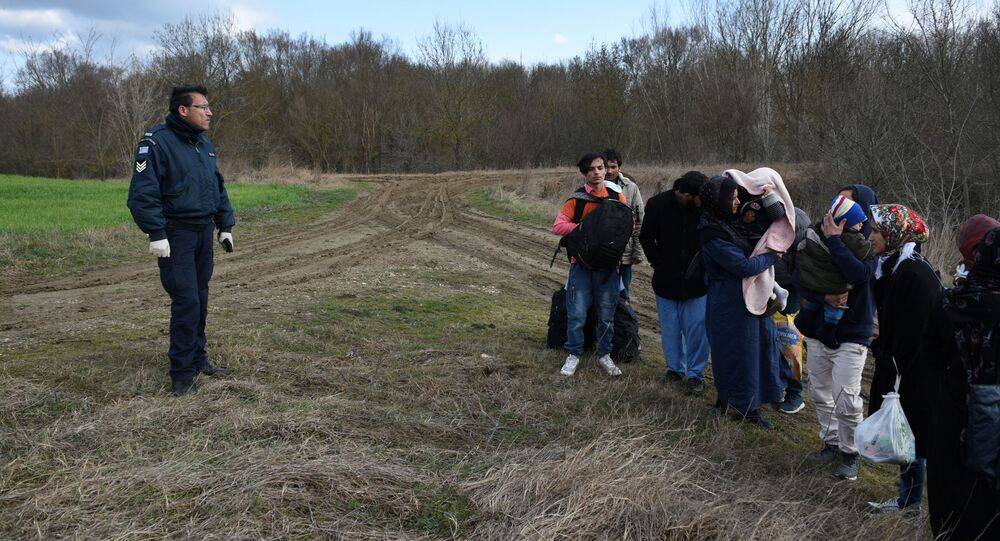 Photos: How Do People Live On Greek-Turkish Border Amid Migrant Influx?

On the Evros River, the natural land border between Greece and Turkey, one can find the village of Marasia. Just a few metres across the river is Turkey. Every day and every night Greek military units and police try to prevent illegal migrants from crossing the border.

Village Council Chairman Giorgos Karabatzakis has told Sputnik that every night the military and police are fighting a battle for the border. According to him, someone from the Turkish side periodically shouts greetings in Greek, apparently to understand whether there is someone on the Greek side and whether the territory is protected:

“Last night, when I was here too (near the river – ed. note Sputnik), we heard voices. Someone was shouting 'good evening' and 'hello' in Greek to see if we had security on our side. We have always answered and will not stop doing so. I do not know who that was. Turkish border guards, refugees? We have no idea. We answer in Greek to make them understand that the territory is guarded”, Mr Karabatzakis says.

According to the village mayor, thanks to the presence of the police and military, the flow of migrants, most of whom are “not Syrians but men from Afghanistan, Pakistan, and Somalia”, has decreased in the last 24 hours.

The residents of this small village are particularly engaged in the struggle these days to prevent the influx of migrants into Greece:

“The residents have prepared for everything. Most of them are senior people. They have stocked up on food and drink for police, soldiers, and border guards. The administrative building of the village council is open to the guys (police officers, border guards, military personnel – ed. note Sputnik) if any of them want to have a rest, as they run up and down the river (in order to track illegal migrants – ed. note Sputnik)”, Mr Karabatzakis concludes.

The situation on the Greece-Turkey border in the Evros region remains extremely tense. Turkey announced last week that it has opened its borders with the EU to refugees because it is unable to cope with a new wave of migrants from Syria on its own.

Thousands of illegal immigrants have since headed towards the border with Greece. Local police and military used tear gas, stun grenades, and a water cannon anti-riot vehicle to stop illegal border crossing attempts.

“We are All Waiting for the Call”

According to government sources, migrants from the Turkish side do not miss out on a chance to enter Greek territory. Some illegal aliens try to damage the fence; some go to the Greek riverbank to swim across the river.

The National Guard of Greece is part of the Hellenic Army. It is staffed by reservists, who permanently reside on the territory of the Guard units.

Twenty-nine-year-old National Guard soldier Vaggelis Gavranidis from the village of Kastanies told Sputnik that he was “fully prepared for mobilisation”. Vaggelis expects to be called up to help guard the Greek border.

“I am part of the National Guard, as are about 50 villagers. We belong to the army, we have military weapons. We are summoned to the army by necessity and order”, he says.

The military has so far not involved National Guard soldiers in patrolling and guarding the border, which is under the pressure of thousands of migrants from Turkish territory. “But we are all on alert and waiting for the call”, he says.

The weapons at the disposal of the National Guard belong to the army and their combat readiness is regularly monitored by combat officers. Furthermore, the servicemen are often summoned to exercises organised by the army.

“We take part in drills and shooting. The army has a special programme for the National Guard”, Mr Gavranidis concludes.

Buses with police officers, which periodically stop at the central square of Orestiada, located in north-eastern Greece, no longer particularly impress the residents. Police officers come to take a walk around the city and rest for a few hours before returning to the border.

Popi Petridou, a resident of Orestiada, told Sputnik that she continues to perform her daily routine and that she believes children who live abroad and read the news worry more than she does.

“Our children are more worried than we are here. We continue with our lives as before”, Ms Petridou notes.

The closed Greece-Turkey border is holding back not only migrants but also Turks who regularly visit Edirne (historically known as Adrianople – ed. note Sputnik). Cafes and pubs in Kastanies have menus available in Turkish because local establishments are regularly visited by clients from abroad.

“They were right to close the entry but now, when no one passes by, we have no job at all because most of our clients are from Turkey”, an owner of a cafe on the square in the village of Kastanies tells Sputnik.

On Clean Monday in Orestiada all hotels and apartments are crowded. Many Greeks, as usual, planned to spend the weekend in Adrianople (Edirne), which is about 7 kilometres from the border.

In the central hotel of Orestiada, a Greek resident of Florina, who was there with her family on the way to Adrianople, told Sputnik that they were going to spend three days in Adrianople but the borders have been closed, so they decided to walk around here in the city.

“Do you know what would happen here today if the borders were open? Lines of cars and buses with the Greeks to cross the border”, says Anastasia, a resident of Kastanies.

“The Turks also visit us, go to our pubs and cafes, drink alcohol, because they are not allowed to do so back home – it is forbidden”, says Anastasia, who thinks closing the border is absolutely right.

“Enough of these migrants”, she concludes.

© Sputnik / Fani Charisi
Orestiada and Castanes Streets
© Sputnik / Виталий Белоусов
Russia Will Help EU Solve Migrant Issue, But Not at Expense of Fighting Terror in Syria - Lavrov
Since Turkish President Erdogan said last week Ankara would no longer restrain hundreds of thousands of asylum seekers from crossing into Europe, more than 10,000 migrants – including many from Syria, Afghanistan, and Pakistan – have gathered at Turkey’s land borders with the EU and at least 1,000 have landed on Greece’s eastern Aegean islands.

Greek authorities have responded with border closures and sent in the military and police to strengthen the border while issuing a halt to asylum requests. The rush to the border is already fuelling a crisis.