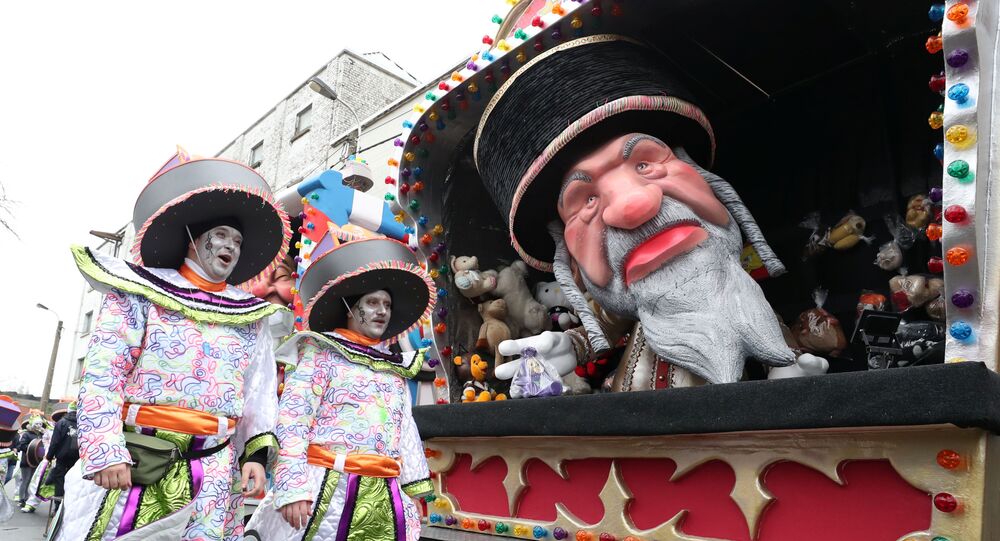 Last year, Belgium’s Aalst carnival landed in the public spotlight after featuring figures of caricature Jews standing over bags of money. The scandal even prompted UNESCO to remove the festival from its list of heritage events, but this did not stop the carnival’s organisers from taking things even further this year.

Authorities in the Belgian city of Aalst, 31 km northwest of Brussels, have defended the town’s traditional carnival. The latter has repeatedly provoked criticism for caricaturing Jews, this year even depicting them as ants, saying that the event was “just fun” and featured local “humour”.

“It's our parade, our humour, people can do whatever they want”, the Aalst mayor's spokesman Peter Van den Bossche told the BBC. “It's a weekend of freedom of speech”.

The spokesman said that the folk festival did not intend to hurt anyone, thus echoing previous statements by Christoph D’Haese, the mayor of Aalst.

“If we can avoid sensitive issues, or visualise a theme without causing hurt, I call for that. We need to be aware of the fact that a large community may feel hurt and have respect for it”, D’Haese told a Flemish radio station ahead of Sunday’s carnival.

“Raising awareness is one thing; forbidding and censorship is something else”, he added.

Sunday’s parade, which took place for the 92nd time, caused a major outcry over the weekend as it featured caricatures of Hasidic and Orthodox Jews, with the latter wearing large fur hats while dressed up as insects, something that some social media users even defined as “vermin” clothing. The participants were pictured posing next to a mock-up of Jerusalem's Wailing Wall, labelled “the wailing ant”, because of its similarity to “wailing wall” in Dutch.

At #aalstcarnaval they are depicting Jews as vermin. I have goose bumps all across my body. The Belgians do know that Jews were sent to the gas chambers from Aalst as well?! The pre-condition was to dehumanize the victims. Speak about Jews as vermin and then 'extinguish' them pic.twitter.com/MxBpTQwU3j

80 years after the #Holocaust and #Europe is still the same: Pictures from the #aalstcarnaval happening now. #Belgium should be ashamed of permitting this vile, repugnant, Antisemitic display of pure Jew hatred. pic.twitter.com/9cyaiVmzbb

WATCH: This is how antisemitism looks like. The Belgian city of #Aalst has made it clear that antisemitism is alive and well in the 21st century. This is not free speech. This is #antisemitism. pic.twitter.com/kVOBqX8MrW

A float pushed by two carnival-goers dressed as Hasidic Jews just rolled by at #aalstcarnaval, blasting “Hey, Jews!” to the tune of the The Beetles’ “Hey Jude” pic.twitter.com/iq4Fq7NfvK

Other controversial costumes at the festival included people dressed up in Nazi SS uniforms, thus provoking major criticism from Israeli authorities, including Yuval Rotem, the Director General of the Israeli Ministry of Foreign Affairs.

“How low can the #aalstcarnival organisers go? Extremely low, it appears. The infamous event features despicable antisemitic exhibitions”, Rotem tweeted, while sharing the video from the festival.

One can't help but wonder whether lessons from the terrible fate of Belgian Jewry's history from merely 75 years ago have been learnt at all. https://t.co/BTDHslbPRL

On Monday, Belgian PM Sophie Wilmès condemned the caricatures of Jews in the parade, saying that the images were harming the country’s values and reputation.

“The use of stereotypes stigmatising communities and groups based on their origins leads to divisions and endangers our togetherness”, Wilmès said.

The festival, however, did not only take aim at Jews, as it also featured floats caricaturing UK Prime Minister Boris Johnson and climate activist Greta Thunberg, which did not seem to attract that much attention from the festival’s critics.

This is not the first time the folk parade has come under fire. Last year, UNESCO dropped the Aalst carnival as a heritage event for accommodating what was described as an “anti-Semitic” float that featured caricature Jews with exaggerated features standing next to bags of money, a scandal that was mocked by some of the costumes this year.

A parade float at the Aalst Carnaval in Belgium featuring caricatures of Orthodox Jews atop money bags and rats, March 3, 2019.
The world is an insane place. pic.twitter.com/y28Tmj5IKo

Israeli Foreign Minister Israel Katz earlier called upon Belgian authorities to cancel the “hateful parade” that has its roots in the Middle Ages, calls that were dismissed by the carnival’s organisers.