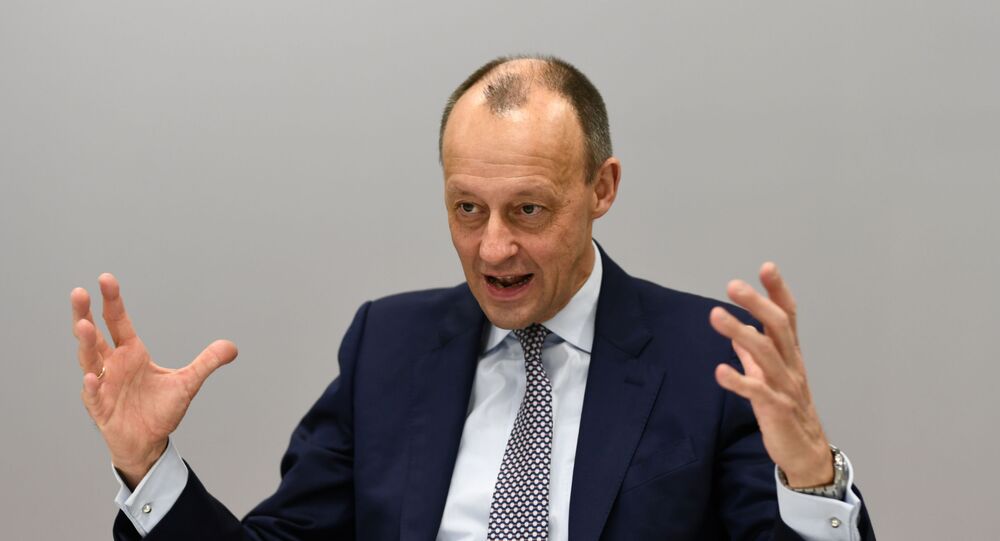 Earlier this week, head of Germany's Christian Democratic Union (CDU) Annegret Kramp-Karrenbauer made a bombshell announcement, saying that she wouldn't run for the chancellorship next year and would leave her post as the party's leader.

Germany’s DPA news agency reported on Wednesday that former head of the CDU/CSU group in the Bundestag Friedrich Merz has decided to run for the office of CDU chair.

Friedrich Merz made a bid for the party's top position in 2018 but narrowly lost the race to Kramp-Karrenbauer.

Following Kramp-Karrenbauer's move not to run for the chancellorship, Merz was defined as a potential frontrunner to succeed her as party head and, eventually, replace Angela Merkel as chancellor.

Merz is also known as one of Angela Merkel's most vocal opponents, slamming her for what he considers to be dragging the CDU to the left, and has lambasted what he describes as an "unregulated influx" of migrants while slamming his party for taking the Alternative for Germany’s rise "with a shrug of the shoulders".

© AP Photo / Markus Schreiber
Merkel's Protégée Kramp-Karrenbauer Confirms She Will Not Run for Chancellor in 2021
According to German publicist Wolfram Weimer, Merz represents "a clear alternative to Merkelism”, sticking to what has been described as basic attitudes, transatlantic partnership and economic competence.

On Monday, Kramp-Karrenbauer announced that she had no ambitions to run for the country's chancellorship, adding that she would remain the party's chair until another chancellor candidate is found.

Commenting on the move, German Chancellor Angela Merkel said she regretted the decision but added that she would continue working together with Kramp-Karrenbauer.