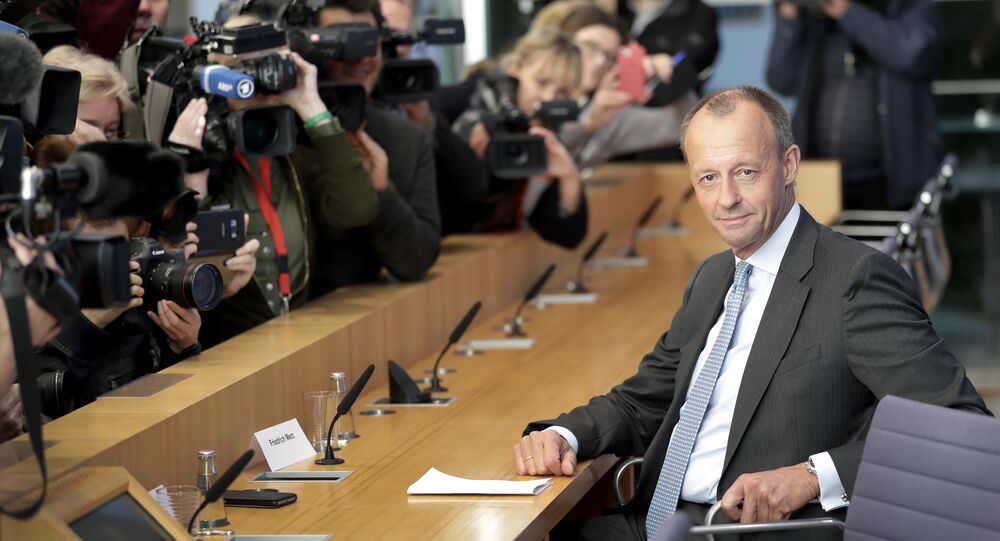 After the current leader of the Christian Democratic Union (CDU), Annegret Kramp-Karrenbauer (AKK), dropped a bombshell announcement that she would not seek the chancellorship in 2021 and would vacate the party leadership post, speculation about her successor and, possibly, the future head of government flared.

Millionaire lawyer and former CDU lawmaker, Friedrich Merz, who lost the race to current party leader Annegret Kramp-Karrenbauer (AKK) in 2018, has been defined as a potential frontrunner to succeed her as party head and, eventually, replace Angela Merkel as chancellor, in less than two years, according to Deutsche Welle.

Although the outlet suggests that the politician has not voiced a desire to compete for the party’s top post, it recalled his decision to leave his post at the American multinational investment giant, BlackRock, and jump to politics to help his party "renew itself", days before AKK’s bombshell announcement.

As another German outlet, Die Welt, reports, the 64-year-old lawyer, who has not only made a political career but has also had several high-ranking jobs in finance as well as becoming a board member of several German enterprises, including the Cologne-Bonn Airport, enjoys the support of those in business.

According to RTL, Merz is leading in polls. According to Forsa-Blitzumfrage, although no possible candidate for the top post is exceptionally popular, 27 percent of respondents consider Merz to be the most suitable candidate for the job. CDU deputy chair Armin Laschet, from North Rhine-Westphalian, is almost 10 percent behind him with 18 percent, while CSU chairman Markus Soeder and the country’s Health Minister Jens Spahn scored 11 percent and 8 percent respectively. However, 36 percent believe that no current candidate is "fit for chancellor post."

Although ntv’s Wolfram Weimer named these four politics in his piece on the turmoil in the CDU as possible candidates for the chancellor post, he pointed at Laschet and Merz as the main rivals in this contest. The commentator cited an unnamed top CDU member from its Bundestag group who summarised the inner-party debates as: "Angela Merkel wants Armin Laschet. Friedrich Merz wants the CDU base." According to the journalist, the head of North Rhine-Westphalia’s government, Laschet, stands for continuing Merkel’s course and can count on her help, as she reportedly sees him as her favorite and administrator.

Merz, however, according to the commentator, embodies a return to the core of the CDU brand and “a clear alternative to Merkelism” as his course is said to stand for what has been described as basic attitudes, transatlantic partnership and economic competence. He also points out that business associations and conservative values, as well as the Junge Union and medium-sized business, are in his favour.

Merz returned to big politics after a gap in 2018, right after Merkle’s announcement that she would give up the top party post. Merz quickly leaped to the front in the race for her job. Before that, Merz worked for several years for global finaicial hedge fund giant BlackRock, turning to the private sector after Merkel ousted him from the post of CDU group leader in the German parliament that he had he occupied between 2000-2002.

© AP Photo / Michael Sohn
CDU Divide Over Migration Policy to Boost AfD's Positions - Spokesman
Known as one of Merkel's more vocal opponents, Merz has criticized the chancellor for what he considers to be dragging the party to the left, and has lambasted what he describes as an "unregulated influx" of migrants, while slamming his party for taking the Alternative for Germany’s rise "with a shrug of the shoulders". Over the course of the election race, he has expressed doubt that the right to asylum should continue to be a feature of the country’s Basic Law, which serves as its constitution.

The CDU top spot became vacant after AKK confirmed media reports that she would not run for chancellor in the 2021 federal elections but offered to remain as party chair until another candidate is found. The news comes after a political crisis in Thuringia, where the state's Minister-President, Thomas Kemmerich, won local elections, gaining votes not only from the CDU but also from the right-wing party Alternative for Germany (AfD), prompting criticism from party leadership.

AKK was elected to succeed Merkel as party leader at a party conference in December 2018, leaving Merz and Spahn behind, after the announcement that Merkel would neither run for CDU party leadership nor seek a fifth term as chancellor in 2021.