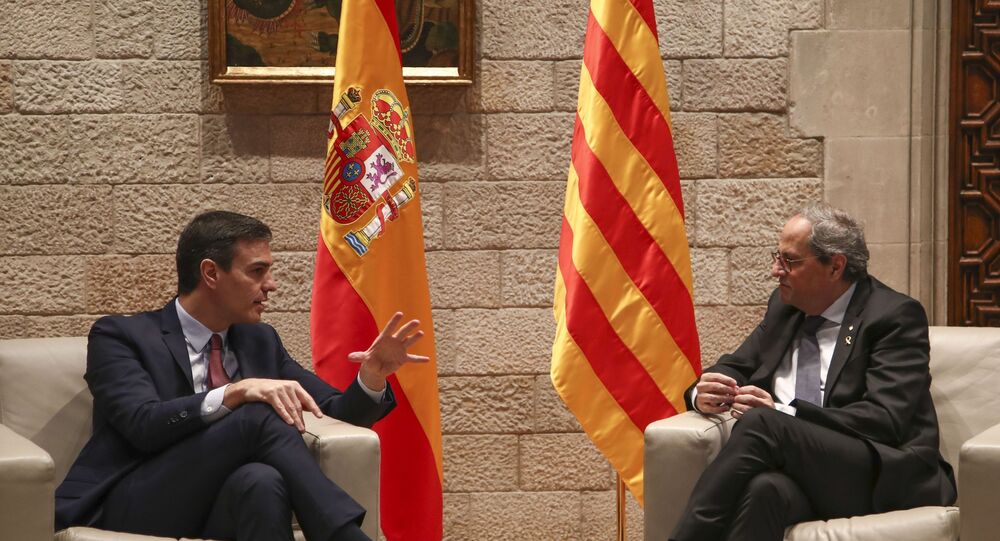 MADRID (Sputnik) - International mediators must be present in planned negotiations between Spanish and Catalan leaders, the head of the Catalan regional government Quim Torra said on Friday, a day after Spanish Prime Minister Pedro Sanchez rejected calls to employ the help of a third party in talks.

Catalan lawmakers are set to hold an inter-party meeting next week to discuss strategy ahead of the upcoming negotiations with the Spanish government.

"There must be a mediator in the negotiation process with Spain. This is a prerequisite", Torra said during a meeting with mayors of the French region of Pyrenees-Orientales, also known as Northern Catalonia.

On Thursday, the Catalan parliament ratified a motion calling for the participation of international mediators in a dialogue between the two parties. The Spanish government has been opposed to any third-party help in discussions. Sanchez reiterated this stance on Thursday in his first meeting in over a year with Torra, by saying that the country's population would act as mediators.

Sanchez has presented a 44-item agenda to Torra, offering a roadmap out of the constitutional crisis. The Spanish leader promised a sincere dialogue with his Catalan counterparts, although the region’s independence will not be sanctioned by Madrid.

The Spanish prime minister struck a deal with Catalan lawmakers to re-open talks in exchange for their abstentions during a parliamentary vote to form a coalition government that he would lead. Two rounds of voting took place in the first week of January, with Sanchez winning the second ballot that required a simple majority in parliament.

On October 1, 2017, Catalonia held a referendum in which over 90 percent of voters supported the region’s independence from Spain. Madrid declared the referendum illegal and arrested a number of pro-independence leaders.