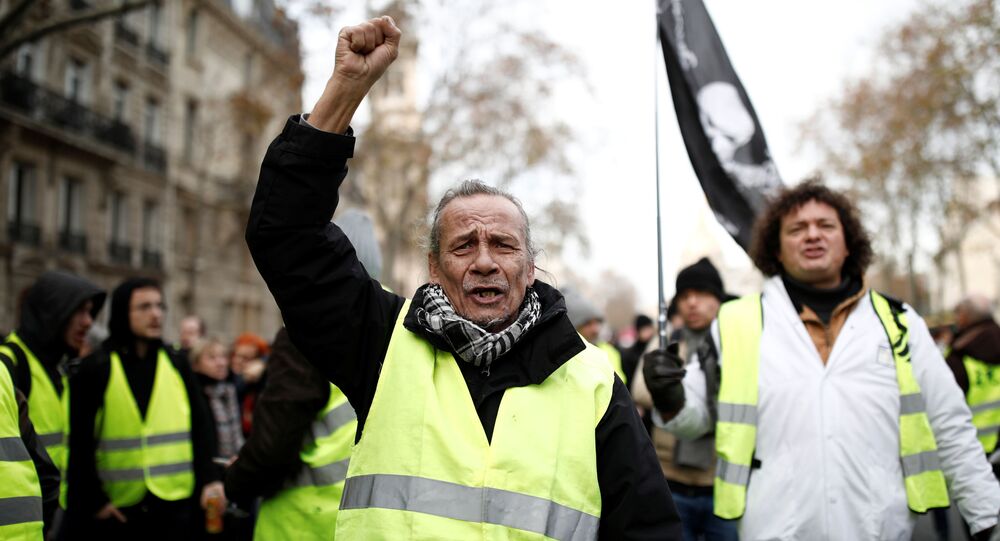 France, especially Paris, has been swept by yellow vest protests since mid-November 2018. While they started initially as rallies against fuel tax hikes, the protests have since grown into a full-scale movement, with participants taking to the streets every Saturday.

On Saturday, French police deployed tear gas and stun grenades in response to yellow vests demonstrators throwing projectiles amid the 62nd week of protests. According to media reports, 32 people were arrested.

The people marching through Paris on Saturday chanted slogans criticising the actions of law enforcement and President Macron’s policies, including his pension reform plans.

Activists have taken to the streets of Paris for the 62nd week of yellow vests protests. The protesters gathered at Porte de Champerret, a station on Paris Metro Line 3, in order to cross the French capital from west to east, ending at the Gare de Lyon.

​Protesters are reportedly calling for an indefinite strike against pension reforms and amnesty for yellow vests.

Since 17 November 2018, France has been swept by what has become known as the yellow vest protests.

Initially, the movement was triggered by the government’s plan to raise fuel taxes, which many French saw as a serious blow to their purchasing power.

The weekly protest movement, whose symbol became the highly-visible safety jackets that French drivers are required to have in their cars, recently marked its first anniversary, but has seen a loss of public support as it is gradually being replaced by another vast wave of protests against a government pension reform plan.