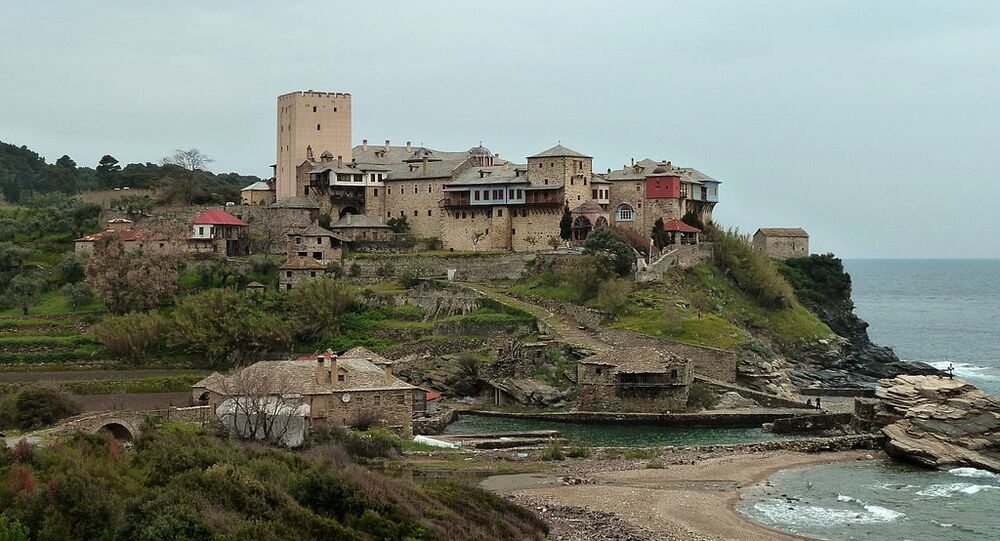 The monastic Mount Athos peninsula in north-eastern Greece is known for having a special jurisdiction within the European Union, in particular in relation to its well-known, but controversial, policy of banning all females from entering the region – with the exception of cats.

A shocking discovery of several bones beneath the stone floor of St Athanasios chapel belonging to the Pantokrator monastery in the monastic region of Mount Athos, Greece has puzzled researchers. The all-male peninsula, which women have been banned from entering since the 10th century, has turned out to be the final resting place of someone with unexpectedly small bones, potentially a female, The Guardian reports.

“Among them were a forearm, shinbone and sacrum that were just so different in their morphology”, said Laura Wynn-Antikas, an American-born anthropologist who was called to examine the remains. “While the others were more robust and had clearly belonged to the frames of men, these had measurements that noticeably fell in the range of a female. They were markedly different in size”.

“If we are talking about a woman, or indeed more than one woman, it will raise a lot of questions”, the researcher said.

Her confusion is not surprising, as the peninsula, which is home to some 20 monasteries and more than 2,000 monks, has remained a women-free zone for some 10 centuries – with the sole exception of female cats.

Phaidon Hadjiantoniou, the architect restorer who discovered the remains while conducting conservation works at the chapel, was the one who contacted Laura Wynn-Antikas upon the shocking discovery.

“This is the first time I have ever seen bones placed under a chapel floor. I was immediately curious and got in touch with specialists including Laura. What is sure is that they wouldn’t be there if these people weren’t significant to the monastery”, the architect explained. He noted that there were some “rare” times in the peninsula’s history where women were allowed to briefly visit the region, but cases of burial were previously unthinkable.

“If a woman is found among the bones it will be the first known incident of a female finding her final resting place on Mount Athos”, Hadjiantoniou concluded.

© Sputnik / Alexey Druzhinin
Russian President Putin Visits Mount Athos (VIDEO)
A thorough examination of the bones has revealed that they were transferred from their original tombs and underwent a second burial, although with extensive care. The researchers believe that at least seven individuals were reburied in the detected spot based on the number of jawbones that were discovered – but no skulls were found under the chapel floor.

The remains have now been transported to Greece’s Demokritos research centre in Athens and will undergo radio carbon dating, a procedure which could take months but will help determine the time of death of the individuals and shed more light on the shocking finding.