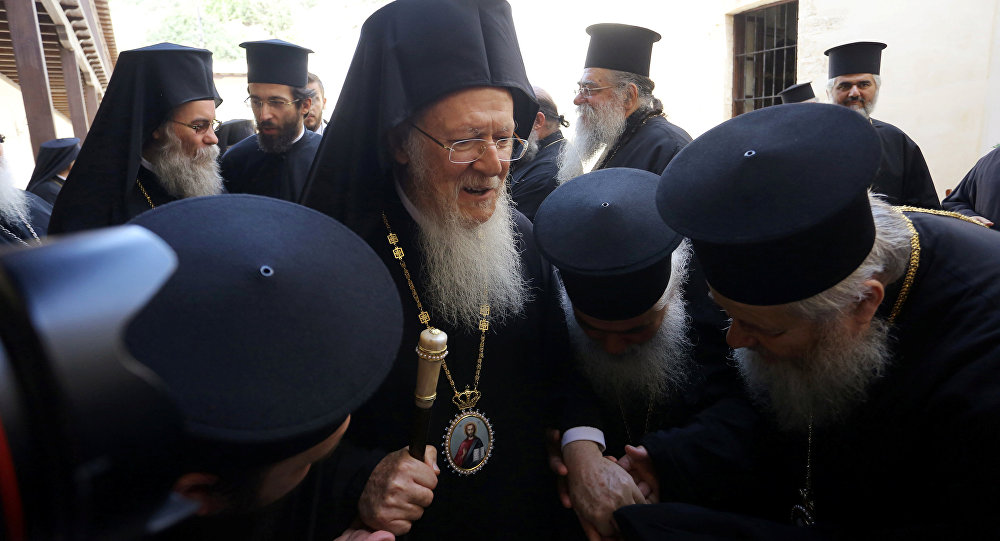 ATHENS (Sputnik) - Ecumenical Patriarch Bartholomew of Constantinople has not been informed about the Greek authorities’ deal with the Church of Greece on the conditions of separation of church and state, the Ecumenical Patriarchate wrote in a blog.

The agreement on the conditions for the disestablishment of church and state within the framework of a constitutional reform was reached by Greek Prime Minister Alexis Tsipras and Archbishop Hieronymos II of Athens and All Greece on Tuesday. The Church of Greece enjoys autocephaly and is ruled by the archbishop. However, some parts of the country, specifically, Holy Mount Athos, are subject to the jurisdiction of the Constantinople Patriarchate.

© Sputnik / Vladimir Rodionov
Greece's Religious Neutrality Will Not Destroy Local Traditions - Prime Minister
"The Ecumenical Patriarchate has not been informed [about the agreement] despite the fact that it has canonical jurisdiction over the Greek territory," the blog read.

When the patriarch learned about the deal, he called Greek consul in Istanbul to request official information about the agreement from Athens, the blog added.

On Saturday, Ecumenical Patriarch Bartholomew is expected to meet with Greek Education Minister Kostas Gabroglou in his residence in Istanbul to discuss the Greek prime minister’s deal on the separation of church and state.

The Greek Education Ministry has said, however, that Gabroglou’s meeting with the patriarch had been planned long ago.

© Sputnik / Sergey Pyatakov
Athens, Greek Church Agree on Conditions of Disestablishment - Joint Statement
The Greek constitutional reform stipulates, among other things, that high-ranked officials will not be sworn in by the church. Instead, a secular ceremony will be held. Moreover, the clergy, traditionally receiving salaries just like other public servants, will not receive the remuneration. Instead, the government will pay annual subsidies to the church, amounting to a total worth of salaries that the clergy should receive as civil servants.

The reform has been long advocated by Tsipras, known to be an atheist, who was the first Greek prime minister to be sworn in in a secular ceremony.