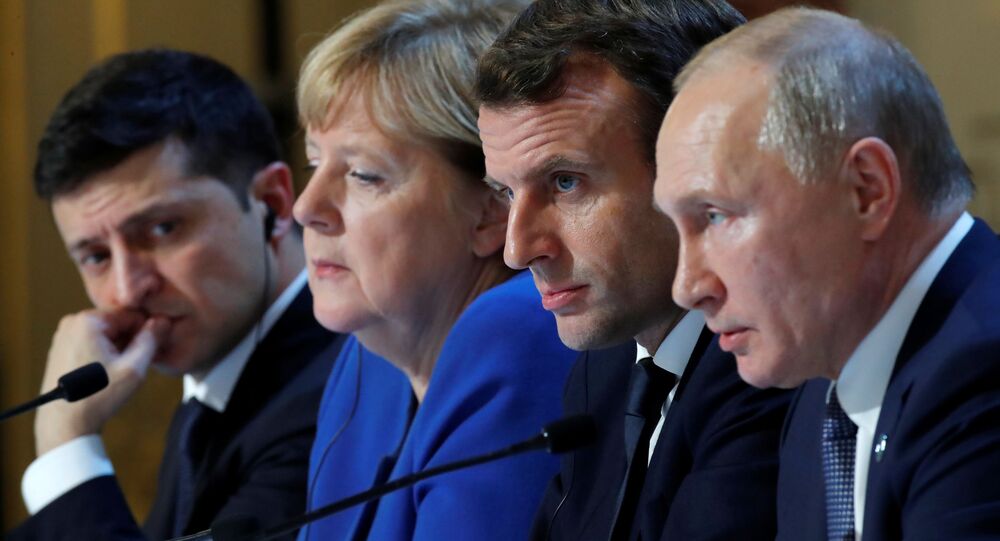 The implementation of peace agreements regarding the settlement in eastern Ukraine’s Donbass region topped the agenda at the Normandy Four talks which wrapped up in Paris on Tuesday.

“Today you are a winner […],” Merkel said ahead of a joint press conference in Paris on Tuesday, in an apparent nod on the Normandy Four leaders’ talks on the situation in eastern Ukraine.

Ukrainian President Volodymyr Zelensky said that he considers the talks “a draw” at the current stage of the negotiating process. According to him, he “felt some concessions” from Putin.

At the same time, Kolesnikov cited sources as saying that Putin and Zelensky spoke to each other “like people from different worlds” and that the presidents only paid attention to their own arguments.

The Kommersant report comes after the Normandy Four leaders adopted a joint communique which confirmed their commitment to the full implementation of the ceasefire in eastern Ukraine by the end of the year.

The leaders also pledged to support “an agreement within the Trilateral Contact Group, within 30 days, on new crossing points along the line of contact, based primarily on humanitarian criteria.”

Kiev launched a special military operation in Ukraine’s southeast in April 2014, after local residents refused to recognise the new Ukrainian authorities, which came to power as a result of a coup. This was followed by the residents voting for the creation of the independent Donetsk (DNR) and Lugansk (LNR) People's Republics.

In February 2015, the two sides reached a peace agreement after talks brokered by the leaders of Russia, France, Germany and Ukraine — the so-called Normandy Four — in the Belarusian capital Minsk.

The deal stipulates a full ceasefire, weapons withdrawal from the line of contact in Donbass, as well as constitutional reforms that would give a special status to the DNR and the LNR.