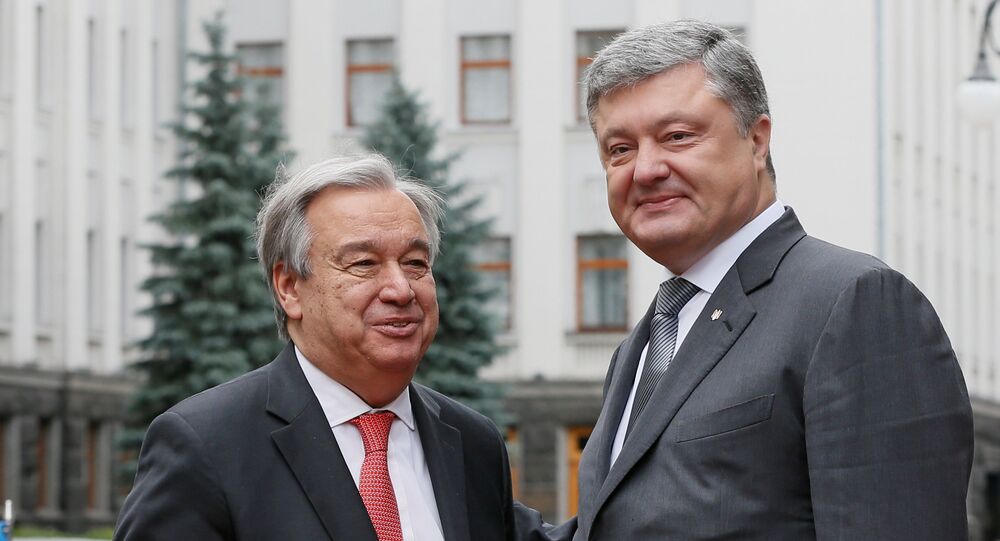 UN Secretary-General Antonio Guterres stated that organization is committed to help the people, who were displaced in the Eastern Ukrainian conflict.

© Sputnik / Natalia Seliverstova
Deployment of UN Mission to Donbass Should Be Discussed With LPR, DPR
KIEV, (Sputnik) — The United Nations is ready to support the Normandy Four format, created by Ukraine, Russia, Germany and France in order to settle the military conflict in the Donbass region, UN Secretary-General Antonio Guterres said Sunday during his visit to Ukraine.

"We know that fighting is still happening. And our appeal is of course for a complete ceasefire, mainly in the context of the recent decisions of the so-called Harvest Ceasefire. We will do everything we can to support different processes that are in place – the Normandy Four, the Trilateral Contact Group, the work of the OSCE," Guterres said during his meeting with Ukrainian Prime Minister Volodymyr Groysman, as quoted by the UNIAN news agency.

The UN secretary-general noted that organization is committed to help the people, who were displaced in the Eastern Ukrainian conflict.

"The capacities of the Secretary General of the United Nations are limited but whatever I will be able to do to support Ukrainian people to be able to have a future peace and prosperity in the context of the territorial integrity and sovereignty and independence of Ukraine is of course something that I fully respect and I am fully committed to," Guterres added.

© Sputnik / Gennady Dubovoy
Moscow Hopes UN to Make Kiev Respect Human Rights in Ukraine
In February 2015, the warring parties to the Ukrainian conflict in Donbas signed the Minsk peace accords, brokered by the Normandy Four, in order to cease fire in the crisis-torn region. The truce, however, has been repeatedly breached, with Kiev forces and Donbas militia accusing each other of violating it.

The "harvest truce," which Trilateral Contact Group on Ukraine (Russia, the Organization for Security and Co-operation in Europe, Ukraine) agreed on June 21, entered into force at midnight on June 24 along the line of contact and will last until the end of August.

UN Chief to Head for Ukraine on Saturday to Meet Poroshenko